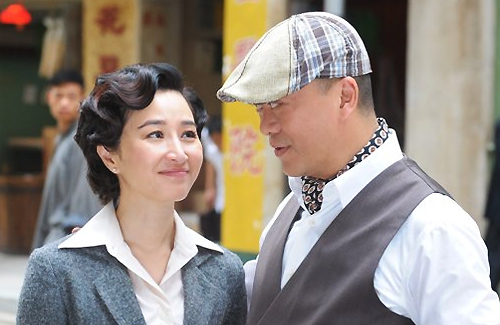 Despite her passion for acting, Esther Kwan (關詠荷) would gladly retire from showbiz to care for her family. After her daughter Brittany’s (張童) birth in 2006, Esther slowly retreated from the limelight, appearing in only two series in the past seven years. This month, the 49-year-old will return to the TV screen once again in the upcoming TVB drama Always and Ever <情逆三世緣>. Esther credits Bobby Au Yeung (歐陽震華) as a motivation for her return, and has nothing but praises for her goofy co-star.

In her mind, Esther sees Bobby as a big kid, someone who is always looking to have fun. “When I was filming for TVB earlier I took on too many series and was tired all the time. I didn’t pay too much attention back then, but this time I was able to seriously observe him. He really loves to play and never stops playing. When he is reading his lines, sometimes he is actually thinking about something else. After awhile he would start to read off of his thoughts. It is very funny.”

Known as a serious and professional actress, many assumed that Esther would have difficulty adjusting to Bobby’s laid back personality. Surprisingly, Esther thinks Bobby complements her own style perfectly. When asked if Bobby makes a better filming partner than her husband Nick Cheung (張家輝), Esther said, “You can say that. Nick and I do clash sometimes. We absolutely cannot discuss acting because we usually have very different views and are both very stubborn. Bobby however can handle anything. He is good with the soft, people skills… When I work with Bobby, I feel very relaxed. He says whatever is on his mind and isn’t afraid of making me angry. I also know that he is very easy-going so I won’t have to be too concerned about hurting his feelings.”

Aside from a great partner, Esther also had a pleasant experience on-set due to a friendly cast and a supportive crew. She praised series producer Chong Wai Kin (莊偉建) for giving the team plenty of break time, and added that filming Always and Ever has been one of the most enjoyable experiences in her acting career.

Regarding her highly anticipated on-screen reunion with Bobby, Esther admits she feels pressured due to high expectation from fans. “There is some pressure. It is a more serious series this time… which is different from before. I don’t know if viewers will like it. I don’t know if they would think less of it because they are used to seeing me in more comedic roles in the past.”

Although Always and Ever is different from her previous works, Esther has faith in the plot and enjoys portraying roles from three time periods. Her favorite scene takes place in the modern times. In the scene, Bobby sweetly proposes marriage to her by singing “Won’t You Marry Me?” <我向你求婚>, a song made famous by Law Kar Ying (羅家英). To tie the song more closely with their drama, Bobby recruited the help of co-stars Ram Chiang (蔣志光), Benjamin Yuen (袁偉豪), and the series’ director and production assistant. The group spent a whole day changing the songs lyrics and ended up with a hilarious piece.

Back to Caring for Daughter

While Esther had a fantastic time on-set of her latest project, she confessed that it is time for her to take another break. When asked if she would film again in the near future, Esther replied, “For now, probably not. TVB asked me if I can film another series during summer vacation. I declined it. When I first began filming Always and Ever, my daughter was all right… After awhile she said, ‘Mommy don’t go to work!’ Later I went to Foshan to film on-location and was away for about a month. Nick was also away filming in Thailand at the time. One day when I chatted with my daughter on the phone, she said, ‘I don’t have mommy, and I don’t have daddy!’ My heart hurt so much!”

Esther recalled the time when her daughter was just 1 year old. She was filming Best Selling Secrets <同事三分親> at that time and thought it would be okay to both work and care for her daughter. Due to the show’s popularity, Esther ended up filming for an entire year. When her daughter accidentally fell and injured herself while she was at work, Esther blamed herself and thought she did a poor job of planning ahead. She is now more careful about selecting projects, opting to act only in short series to free up more time for her family.

For someone as passionate about acting as Esther, spending time away from her career must be a big sacrifice. To Esther, this sacrifice is necessary and worthwhile. “When I decided to have a child, I was mentally prepared [for this possibility]. My daughter is an only child, without any siblings. She would become very bored easily. I am therefore not only a mother, but also play the role of a sister. She is also very perceptive. She loves to chat with me on weekends and ask about my childhood. I also try to get her to tell me some of her secrets so we can understand each other better. When she said she feels very lucky and is very happy everyday, I felt very joyful and satisfied. My sacrifice is worth it.”

Esther also very willingly takes responsibility for the household so that her husband Nick can pursue his career without worries. Esther is truly happy about Nick’s success and that even though she lost the chance to shine beside him, she instead gained something far more important. “Recently, Nick brought our daughter on a trip. I had to work so I couldn’t go with them. My daughter was sad when she was packing her bags. She cried and said to me sweetly, ‘Mommy I really miss you. Why don’t we buy a present for each other?’ She is even more romantic than Nick, more than me. However when dad goes to work, she would not ask too many questions, so Nick can always relax and focus only on his work.”