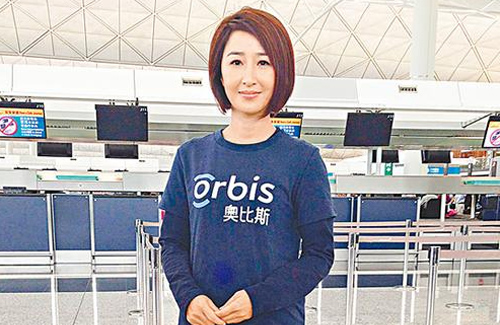 Dedicating her time to raise her daughter, Esther Kwan (關詠荷) has diminished her television appearances in recent years. However, she is actively involved in charity work. Her latest project is a four-day trip to the rural outskirts of Shandong Province in Mainland China, where she will be visiting children who are visually disabled. Part of the trip involves observing an eye surgery being performed on one of these children.

Just before she boarded her flight, Esther shared, “Many of my friends who heard about this trip have generously donated food, toys and stationery. My daughter has also donated many of her beloved stuffed animals, even though she was initially reluctant and was crying over having to part with them.”

On why she did not bring her 9-year-old daughter along on the trip, Esther said that she would bring Brittany she is older and more independent. As Esther’s husband, Nick Cheung (張家輝) would be in Beijing filming while Esther is away, Brittany would be home alone for at least an entire day. Esther added that she was hoping to use the opportunity to teach Brittany to be independent.

As Esther’s showbiz career was first launched through ATV, she also commented on the impending demise of ATV, “I hope all the employees will be able to receive their wages, and will have career options at other television stations.”

On why ATV has not yet acted on HKTV’s collaboration proposal, Esther expressed, “I’m not too informed on commercial knowledge. I hope that the government would be able to generate more competition in the television market. My personal favorite is TVB – I still watch it from time to time. But I don’t think I will be returning to acting anytime soon.”

9 comments to Esther Kwan Visits the Visually Disabled in Shandong