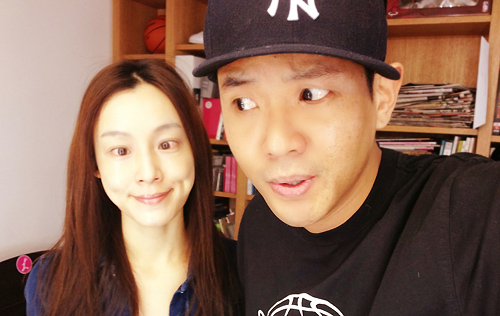 Taiwanese artist, Blackie Chen (陳建州), was photographed behaving intimately with a long-haired woman in a nightclub by the Hong Kong media. Reportedly, Blackie went from touching the woman’s hands, to whispering in her ear, and kissing her face.

Accused of cheating on his wife, Christine Fan (范瑋琪), Blackie strongly denied the claims.  Blackie wrote on his Weibo blog, “When I saw the news this morning, I was dumbfounded! They said that I was behaving intimately with a woman at a Hong Kong nightclub…what nonsense! Obviously, we were just talking, but the photos were deliberately taken [from an angle] to make it look like we were kissing!  It’s really exaggerated! Everyone would be very upset after seeing the news and wondering why I would behave like this after marrying Christine!  Please be assured that I will not mess with girls, because I already have a great girl at home! The most critical point is that since I was young, I never drink alcohol!”

Blackie posted a photo of Christine on his Weibo, proving that the couple are still in unity. Christine also commented, “There is no need to pay attention to such nonsense news!”

Despite his vehement denial that he had cheated on Christine, some fans believed Blackie while others did not. Fans observed that his gestures in the photos appeared to have crossed the line, while spotting that Christine’s eyes appeared “red from crying” over her husband’s infidelity.

A netizen wrote, “They are only pretending…maybe she feels terrible inside.”  Another fan criticized Blackie for pretending to be innocent even after the exposure of the “incriminating” photos.

Others did not believe that “there is a cat who does not like to eat fish,” while another asked, “If you do not drink, why did you bother going to a nightclub?”

Blackie’s incident attracted more than 20,000 comments and 35,000 reposts in the Weibo community.