Fans Rush to Give Ruco Chan Some Red Packet Money 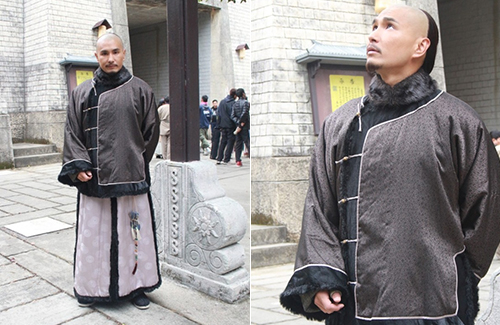 After taking a few days off from the studios of Heaven’s Will <天命>, Ruco Chan (陳展鵬) is now back to work, donning a Qing royal outfit to take on the role of Heshen, infamously known as the most corrupted official of the Qing Dynasty.

The drama, set during the reigns of Qianlong and Jiaqing, follows Heshen’s final days before his death in 1799. Shaun Tam (譚俊彥) stars as the Jiaqing Emperor.

While the cast and crew of Heaven’s Will got to rest during their three days off, Ruco actually used the opportunity to dig some more gold overseas. The TV King went to Malaysia and Mainland China for some shows over the weekend, earning some “real money.”

“I only visited my grandma on the New Year,” said Ruco. Asking if his family had pestered him with the “usual” questions, Ruco said, “No! My family knows what’s going on, so they won’t ask me. They all know that I’m at an important period in my career right now!” (No marriage questions at all?) “Nope! They’re all happy to see me doing shows. I’m using this opportunity to get some real money!”

Ruco, who won all three TV King awards last year including the coveted Best Actor in Hong Kong, experienced heightened popularity when he went to Malaysia and Mainland China. Many of his fans rushed to give Ruco some red packet money, with some fans even giving him cash on the spot.

“A regular viewer gave me a $500 straight up. Didn’t even bother to put it in a lai see [red envelope]. Told me that he wanted to catch the luck I had last year!”