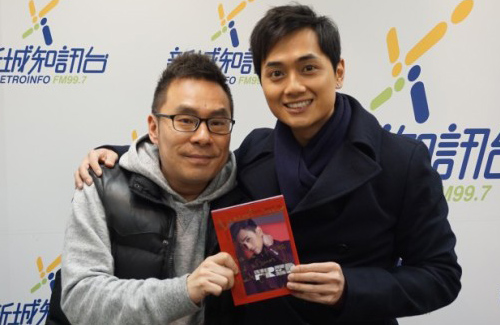 In the 12 years that Fred Cheng (鄭俊弘) has worked for TVB, he only approached management once to ask for more work opportunities. Fred recalled how he approached TVB executive Catherine Tsang (曾勵珍) in 2013, and he was so nervous that he had to practice saying his lines numerous times beforehand.

The moment Fred saw Catherine, all the words just fell out of his mouth, “I’ve been with the television station for ten years now, and I’m ready to take on more responsibilities.” At the time, Fred had no idea the impact these few lines would have on the course of his entire career, as that was what led to his transition from an actor to a popular singer.

As he is a music lover, Fred is extremely grateful for the opportunity to release his own albums. It was a learning process, and in making the transition from actor to singer, Fred made sure that he remained down-to-earth in order to deal with all the new challenges he faced. Currently, to pursue his love for music, Fred is pursuing a music degree in the United States. He said, “As I had only completed high school before I joined the entertainment industry, I did not have the chance to attend university. Now that I have the chance to pursue tertiary education, I will treasure it, especially since it’s in a subject that I’m passionate about!”

Fred then recounted his earliest experience with singing before an audience – when he participated in the TVB New Talent Singing Awards in 2001. At the time, Fred had just returned to Hong Kong from Canada where he grew up. He was not very familiar with writing in Chinese and when he had to fill in a form on what his favorite song was, he wrote the only Chinese words he knew, “His Woman” <他的女人>. When he made it to the finals, he was asked to sing that very song as a finalist, although he actually had no idea what the song was! Thankfully, Fred was still able to successfully embark on a career in the entertainment industry.