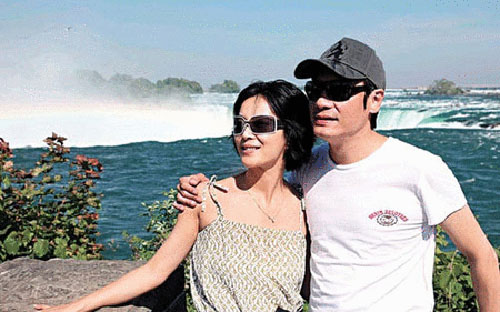 Gallen Lo Ka Leung met his second wife, Sophie Su Yan, on the set of a mainland series. They dated for a year before getting married in 2009.The newlyweds currently reside in Beijing, but Gallen will often return to Hong Kong to visit his son from his first marriage.

Yesterday, Gallen performed at a concert in Canada. During the concert, Sophie surprised Gallen by presenting him with a bouquet of flowers. Together, the pair sang a duet together on stage. Since it was Sophie’s first time visiting Canada, they visited tourist attractions such as Niagra Falls and posted the photos on their blogs.

Recently, Gallen and Sophie appeared on a television interview program, Super Interview <超级访问> and spoke publicly about their married life together for the first time.

Gallen’s first marriage to ex-wife, Clare Fong Man Yee, may have left him with a shadow on his wedding day to Sophie Su. Prior to the wedding, a Hong Kong tabloid published a blistering report claiming that Gallen did not treat Clare and his son well, while splurging money on Sophie. Allegedly, the public’s opinion may have made the groom nervous on his wedding day. According to Gallen’s Master of Ceremonies on the wedding day, Wang Dong, Gallen smoked profusely prior to the wedding ceremony. Wang Dong said, “There was already a large pile of cigarette butts in the ash tray in front of Gallen, but he kept putting more cigarette butts into it.”

Gallen Cooks and Cleans After Marriage

According to the Super Interview program staff, Gallen  and Sophie behaved like Siamese twins on and off the stage. Before the start of the recording, Gallen used a brush pen to carefully write a love letter to his wife, expressing his romantic sentiments about the marriage. Gallen later explained that he smoked profusely on the wedding day since he was exhausted from all the wedding preparations and was not due to anxiety from the tabloid reports.

After marriage, Gallen and Sophie were often separated due to their individual filming requirements. However, Gallen would send Sophie daily text messages and call her about his whereabouts. While filming a series, Gallen also took short breaks to visit his wife.

Prior to their marriage, Sophie told Gallen, “I do not want a celebrity [in a husband]; I want a cook and a honest spouse.” To satisfy Sophie’s expectations of a perfect husband, 47-year-old Gallen learned how to cook for the first time. Sophie said,”He called my grandmother, who lives in Hong Kong to get recipes. He wrote down the list of ingredients and the preparation steps and was able to cook a table full of delicious dishes!”

Aside from cooking, Gallen also performed other household chores. He cleaned the laundry and watered the flowers in the garden.

Jayne: Sounds like Gallen is deeply in love with Sophie. Only a man deeply in love would put in all that effort to please his wife, especially since Gallen has a more hectic filming schedule than Sophie. Yet, he cooks and cleans!