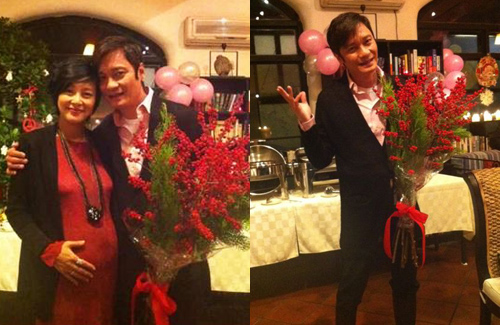 Gallen Lo (羅嘉良) and Sophie Su (蘇岩) remained happily in love since their marriage in 2009. Often sharing their blissful love relationship on social networks, the couple announced last October that they are expecting their first child together. Gallen had since reduced his workload to care for his wife, responding to her needs on a 24/7 basis.

On Monday evening, Gallen and Sophie were caught baby shopping in Causeway Bay, Hong Kong. The expectant parents held hands tightly and appeared cheerful despite the presence of reporters. Wearing a loose maternity dress and flat-soled shoes, Sophie strolled cautiously with her heavy eight-month belly. The couple continued to flaunt their love publicly, revealing matching tattoos on their left ankles. Gallen even wore a pin that was made with the couple’s loving photo.

The two visited several baby supply and clothing shops but left empty-handed. Gallen and Sophie shopped mainly for pink and white-colored dresses and accessories, fueling speculations that they are expecting a daughter. When asked whether they know the sex of the baby, Gallen replied that they do but will not tell.

They continued their shopping spree, stopping briefly to ask reporters to help them locate Hilary Tsui (徐濠縈)’s fashion store Liger. Gallen stated that he is good friends with Hilary’s husband, Eason Chan (陳奕迅), and heard that Liger carried nice dresses. Gallen posed for photos before heading into the store, hoping Eason will see them and know that he was there.

Fifty-year-old Gallen has one son from his previous marriage. He and ex-wife Clare Fong (方敏儀) separated in 2008 after being together for 28 years, in which they were married for 10 years. Gallen relinquished custody of his son to his ex-wife, and left them a condo worth $40 million HKD.

The same year, Gallen met current wife Sophie on the set of their mainland drama Perfect Ending <完美結局>. Gallen and Sophie quickly fell in love and married in 2009 after dating for four months. Since his marriage, Gallen focused solely on his mainland career and gradually faded from Hong Kong’s entertainment industry. Currently, Gallen has put his career on hold to take care of his wife, who is expected to give birth sometime in May.