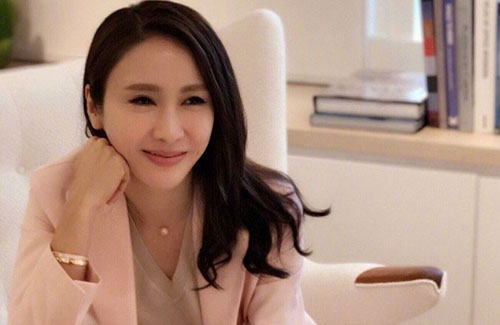 Some photos of Gigi Lai (黎姿) and her three young daughters have been shared online!

The former Hong Kong actress, best known for her works at TVB, dropped out of showbiz in 2008 to succeed her brother’s cosmetic business. Gigi is married to businessman Patrick Ma (馬廷強), who she married in September 2008. Together, the couple have three daughters: twins Patricia and Gianna (born 2010) and Pegella (born 2012). Gigi has always been very careful with maintaining the privacy of her children, and has never shared direct pictures of her daughters online. However, earlier this month, Patrick’s older godsister Ye Ying (葉鶯) of Gigi’s shared several photos of Gigi with her daughters, lead to some hot discussions online.

In the photos, Gigi and her family seem to be at an event. All three of her daughters wore white dresses, and Gigi herself was dressed in a pale pink gown.

In Ye Ying’s post, she also shared that Gigi and Patrick secretly dated for eight years before tying the knot in 2008. Ye Ying wrote, “Gigi Lai’s beauty is from the inside. To be honest, when Gigi Lai was still popular, I was busy with my work, so I’ve never seen her work. Her and my younger godbrother (Patrick Ma) secretly dated for eight years. After marriage, she carried the duty of realizing her younger brother’s dream. She was sincere in learning and was dedicated to her work. Interacting with her closely, I have witnessed how much heart she has put into being a wife and mother. Although her grandfather was Lai Man-wai (, the father of Hong Kong cinema, she did not grow up in a wealthy household. She made her debut at only 14 years old to support her brother’s college education. She is beautiful!”