Gigi Leung (梁詠琪) married her Spanish husband, Sergio Crespo Gutes, in 2011, and the “chopstick couple” welcomed their daughter Sofia (祈淑菲) back in February 2015. Born with long limbs, the 4-year-old girl inherited her parents’ height and is already over 100-cm tall. Gigi expressed, “She looks more like a 7-year-old child!”

Sofia, who has already surpassed Gigi’s waist, might be taller than mommy before she even enters university! In fact, Gigi, who is 176-cm-tall, believes her daughter might reach a height of 185 cm by the age of 18.

A few months ago, Gigi’s family of three did a genetics test, and Gigi said she was satisfied with the results. Their risk for cancer and other serious diseases were at a normal level, and the test found that Sofia is more skilled at dancing, singing, and linguistics than other aspects. In reality, Sofia also really likes to sing and dance.

A few days ago, Gigi and her husband went to pick up their daughter from ballet class in Central. Afterward, the family of three to the bookstore to look at books. The couple appeared gentle and accompanied their daughter to pick out toys. Sergio held up a box of pink toys for Sofia to look at while Gigi knelt to ask her little princess for her thoughts.

Later, the mom and daughter picked out a book together and sat down to read it together. Sofia smiled from time to time, as Gigi patiently told the story. Sergio saw the mom and daughter reading happily and quickly went shopping at the supermarket. Within 15 minutes, he went back to the bookstore. Gigi left Sofia with Sergio while she went downstairs to buy a greeting card. Once she returned to the bookstore, the family of three left the building hand in hand. 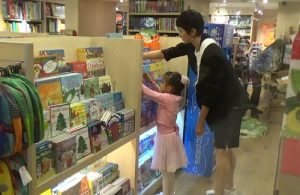 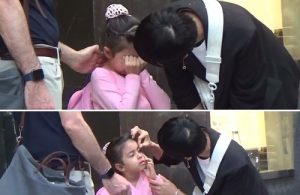