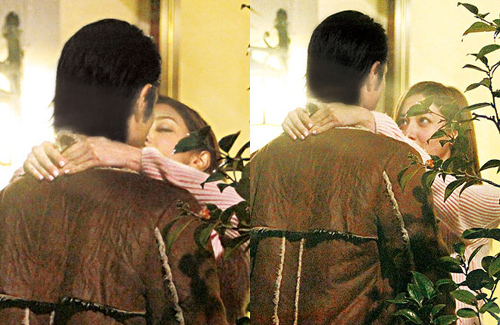 Since Grace Chan (陈凯琳) was photographed visiting Kevin Cheng‘s (郑嘉颖) house for two hours, the couple has been speculated to be dating.  Kevin even gave an elaborate excuse that Grace went to his place with the intention of borrowing DVDs, but they were spotted returning to TVB Studios together afterward.

Allegedly dating for two months, 45-year-old Kevin is old enough to be 23-year-old Grace’s father.While both Kevin and Grace did not believe in age restrictions in a relationship, the Hong Kong media crudely dubbed it as a “father-daughter romance”.

The pair looked very natural and had sizzling chemistry as they filmed a kissing scene for Blue Veins <僵>. Falling easily into Kevin’s embrace, Grace completed the scene in one take. When the cameras stopped rolling, the two remained by each other’s side and happily chatted together.

When questioned on the latest developments in his “relationship” with Grace, Kevin stopped giving an explicit denial. He said rather openly, “Everything has to start from friendship. Age is not a factor, but what’s more important is timing and good communication. I cannot say for sure if we have a chance but everyone needs to give me a break and stop obsessing over this or she’ll be scared off and I’ll really be destined for a life of singlehood!”

When Grace’s father was interviewed earlier, he insisted that Grace did not have a boyfriend. However, speaking with the press again last week, he dodged questions about the rumored relationship.