The cast of TVB’s OMG, Your Honour <是咁的，法官閣下>, including Grace Wong (王君馨), Eddie Kwan (關禮傑), Louisa Mak (麥明詩), Hugo Wong (黃子恆), and Oscar Leung (梁烈唯) promoted their drama during an event at TVB City in Tseung Kwan O. Among the clip broadcast for the drama, there was a scene of Grace and Lisa Chong (莊思明) kissing madly in a restaurant’s walk-in freezer.

“That scene was very cold to film, but the acting was very hot and passionate,” Grace said. “It was my first time kissing a female colleague. I wasn’t too nervous because I’m familiar with Lisa.”

The scene finished successfully in one-take even though it was both actresses’ first time kissing another female in a drama. “Afterward, I messaged Mat Yeung (楊明) complimenting him for knowing how to choose (girlfriends),” Grace said. “Lisa’s lips were the best.”

In the drama, Grace and Ben acted as newlyweds and filmed a lot of intimate scenes together. She revealed there’s a scene where ear biting was involved. Since it was at a supermarket, a lot of passersby, especially the elderly, surrounded them to watch. “Filming that scene was very embarrassing,” Grace said.

When asked if her husband, Daniel Zhang, will be upset, she said, “I didn’t tell him about it, and he doesn’t even watch TV. He probably won’t find out. He doesn’t need to see it.”

However, when she was filming for the drama, she would go home, hug him, and told him how grateful she was that he was nothing like Ben’s character in the drama. Grace and Ben’s relationship takes a turn for the worse when Ben begins to treat her coldly after half a year of marriage.

Contrary to Grace and Ben’s rollercoaster relationship in the drama, Louisa and Hugo portray a couple with a very dull love. Louisa revealed that the role was challenging and really tested her patience since her personality is more passionate in reality.

When reporters mentioned famous lyricist, 58-year-old Calvin Poon Yuen Leung (潘源良) married his Canadian girlfriend, Rita, who’s 17 years younger than him, in Toronto on September 22, Grace mentioned Rita was her church friend when the actress first came to Hong Kong. “I didn’t know she was getting married. I’m very happy for her. Congratulations to them.” 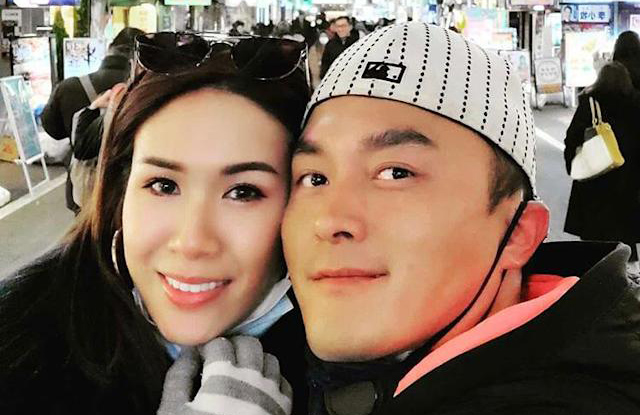