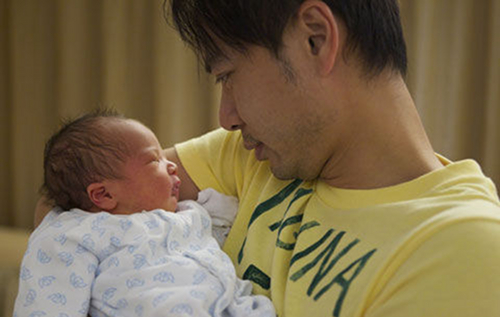 Although the birth of Rex was a joyous event, Hacken did not publicly announce it to the media. When Ryan was born, Hacken excitedly anticipated the birth and told many of his friends about it. As a result, the media was aware of Ryan’s impending birth and Hacken felt obligated to distribute photos of his first newborn son. Allegedly Hacken chose to remain quiet , Hacken did not want to handle Ryan’s birth in such a public manner at the time. Hacken chose to remain quiet about Rex’s birth.

Rex’s pediatrician will be Pang Yeuk Shue, who is also the doctor for Cecilia Cheung Pak Chi’s son, Lucas.

Hacken’s music company, Universal Music, is currently in a royalty dispute with TVB. As a result, Hacken’s exposure on TVB has decreased, reducing his income earning opportunities as well. In order to earn more money for his expanding family, there are rumors that Hacken may host I-Cable’s broadcast of the World Cup this year.

Jayne: Congratulations to Hacken and Emily Lo. What a cute baby with pinchable cheeks!