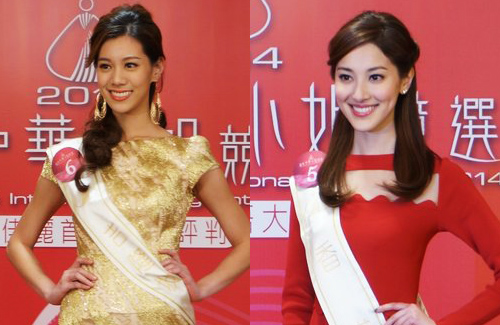 Wearing an assortment of different dresses, the sixteen contestants of the 2014 Miss Chinese International pageant met the judges at the press conference yesterday. The meeting’s MC Luisa Maria Leitão (黎芷珊) shared her thoughts about competing in a pageant and gave encouragement to the contestants. The competition finals will be held on Sunday, January 26.

Hacken Lee praised the three candidates from Canada, exclaiming that Canada continues to have a good track record of high-quality candidates. He also picked out #5 Peremin Tubkaew (林佩敏) from Bangkok and #5 Grace Chan (陳凱琳) from Hong Kong for having the most stand-out appearances. Grace Chan, winner of the 2013 Miss Hong Kong pageant, was identified for having a flat figure, which may negatively impact her score. Hacken said, “I care more about the overall image. People already said she was like that when she was competing for Miss Hong Kong, and she still won the crown.”

Grace thanked Hacken for his compliments. In regards to her flatter figure, Grace said, “I’ve discussed this with my roommate [#6 Zhiny Ong (黃之豫) from Kuala Lumpur], and she said she was a bit worried about it. I told her that when I was competing for Miss Hong Kong, my mother taught me about how important it was to just be yourself. Do not emphasize the poorer qualities and concentrate on improving the better qualities. We will be supporting each other.”

Zhiny admitted that her flat figure had made her feel as if she was one of the inferior competitors in the international competition. She thanked Grace for sharing her experiences and thoughts, saying, “I’m from a very small town so sometimes I would feel inferior in certain areas, whether it’s my body or my language ability. I don’t have enough confidence, but after chatting with Grace, I feel much better.”