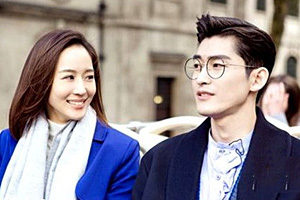 Slated to premiere on April 29, Here to Heart shares a story of 2 ex-lovers from England who broke up several years ago because of disapproval from both sides of their families. Despite still being in love with each other after all these years, their relationship is laden with many obstacles. Meeting again on the business battlefields, Hans has become ruthless and calculating after being betrayed.

The trailer also shows Hans and Janine taking on many heated scenes, including an intimate bed scene. Janine was seen breaking down during an emotional scene when she confessed her love to Hans. In the short scene, she cried, “I’ll never regret loving you in my life!”

Hoping to give more convincing performances, it was revealed that Hans and Janine sat down and thoroughly discussed how they should tackle their roles. Hans especially put thought into his character’s look and bought his own glasses.