In another episode, the actor pulls on Wang Xiaochen’s bra strap when he tries to save her from a fall. One scene shows Zhang Han straddling the actress on bed while he tries to undo the buttons of her shirt. While kissing her in another scene, his hands are seen straying down on her butt. 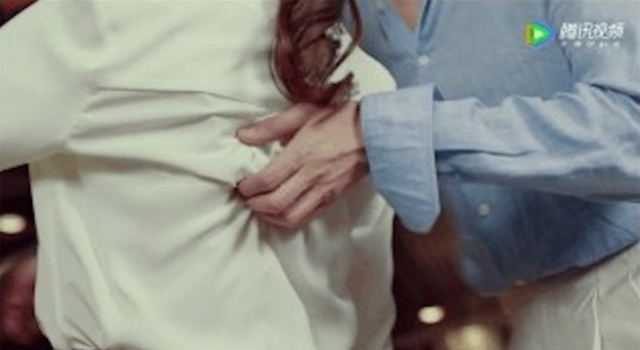 Viewers are disgusted by the scenes, especially by how Zhang Han’s hands linger on Wang Xiaochen’s breasts in episode 28 while they are sitting in a dining table. Appearing to shift her onto his lap, his hands awkwardly sweep up her chest.

As the drama is produced by Zhang Han and he has power over how the scenes are filmed, many netizens suspect he had intentionally taken advantage of his co-star in the name of filming “in character.”

Since airing, Gentlemen of East 8th has received a low rating of 2.2 points out of Douban’s 10-point system. Many viewers felt Zhang Han’s touchy scenes are very disrespectful of women, and are shocked why the scenes are handled this way and how it passed censorship despite China’s strict broadcasting guidelines.

The phrase “Zhang Han’s hands” became a hotly searched topic on Weibo, with netizens digging up clips of the actor’s intimate scenes with Janine Chang (張鈞甯) in 2018’s Here to Heart <溫暖的弦>. Some viewers felt that Zhang Han’s hands were suspiciously close to Janine’s chest while twirling her to face him in one scene.