Since his divorce in 2018, Hawick’s relationship status has been under the limelight. The actor, who has had few rumors, was snapped sweetly holding hands with a girl on the streets which led netizens to speculate who his new girlfriend was. Alas, it was a case of mistaken identity when they initially named actress Una You (尤靖茹). She quickly denied the rumor by posting photographic proof that she was undergoing quarantine in Ningbo at that time.

Just as netizens continued their guess game, there was news that Hawick was spotted at Hangzhou’s Jingshansi with his new girlfriend, whom the netizen correctly named as Cherry Li. Looking their social media profiles, netizens discovered that the two donned the same brand of caps and trousers. On October 18, a video of the two dating on the streets surfaced online that had captured front views of the couple! Dressed in thick winter wear, Hawick and Cherry allegedly proceeded for a swap test and left together, with Cherry behind Hawick as the two sweetly held hands.

Hawick: We are very compatible 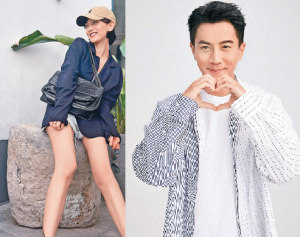 Interviewed by a Hong Kong paper yesterday, Hawick was protective of his new girlfriend and thus did not reveal much, but generously admitted to his new romance. “Thanks for everyone’s blessings, we are doing well. We have got along for some time and was introduced by mutual friends. We have very compatible personalities and get along comfortably and happily! The relationship is going well, thanks for everyone’s concern,”

Busy with filming popular program Call Me By Fire <披荊斬棘> in recent months while touring various Chinese cities on a play performance, Hawick was hospitalized with high fever once, and Cherry had likely taken care of Hawick during that time. Coincidentally, Cherry and Yang Mi play good friends onscreen in the hotly discussed drama, while she is now dating her ex-husband offscreen – leaving netizens marveling at the incredible “plot development” in real life!

Despite their low profile, Hawick and Cherry have left traces of their blossoming romance online such as respectively updating with photos of the temple they visited, mutually liking each other’s photos, and posting similar carved pumpkins on Halloween. Cherry also left red heart and kiss emojis beneath Hawick’s posts, while Hawick speedily gave his thumbs up when she posted gorgeous pictures of herself.