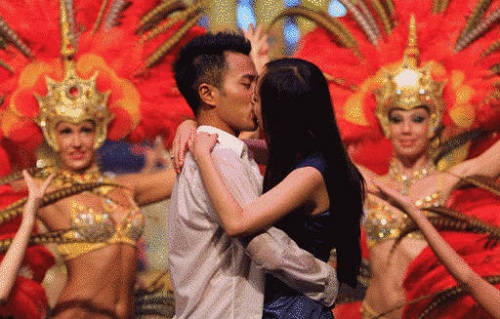 Romantic comedy, Holding Love <Hold住愛> is finally here! Known to be a passionate couple in real life, Hawick Lau (劉愷威) and Yang Mi (楊冪), share many intimate hugging and kissing scenes in the movie. Fans are also looking forward to see the couple’s love collaboration in their first movie together. Hawick plays a magician in Holding Love that falls in love with Yang Mi. In the movie, the couple get married after dating shortly, in which their relationship is tested along the way. Chrissie Chau (周秀娜) plays a sexy woman who comes between the couple’s relationship.

Speaking about his magician role, Hawick excitedly revealed that he also took a personal interest in magic after filming the movie. He was eager to learn some tricks from the magic consultants, and was delighted after learning the secrets behind the tricks. Hawick reveald that magic and acting were similar, “I realize that magic and acting are closely related. Every part needs attentive planning, and they are all closely knitted together.”

In Holding Love Hawick also displayed some magic tricks to impress upon the audience. The audience can look forward to seeing Hawick perform poker card and magic coin tricks.

Besides performing the basic tricks, Hawick will also display a dangerous water escape magic stunt. Assisted by Yang Mi, Hawick will be confined into a water tank, in which he would need to to ingeniously escape from the water. The magic show also ended in a dazzling and colourful background, which was dramatized by the sexy dancers in peacock head dressing.

Under the enchanted magical setting, Hawick and Yang Mi were so overjoyed that they shared a passionate long kiss, displaying their affection in the movie!