Hawick Lau Plans to Propose to Yang Mi in 2013? 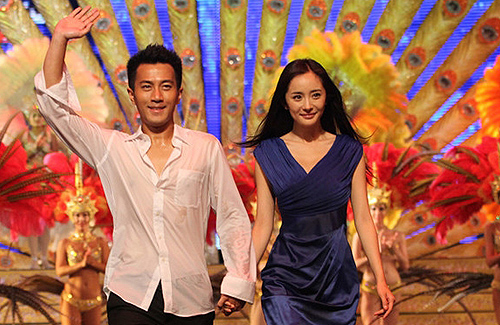 In a recent interview with mainland China’s Tian Tian Xin Bao, actor Hawick Lau (劉愷威) slipped that he may consider proposing to his girlfriend, Yang Mi (杨幂), in 2013.

The 38-year-old Hong Kong actor is currently starring in Yu Zheng’s (于正) In Love with Power <山河恋>, popularly known as Beauty Without Tears <美人无泪>, the third installment of Yu Zheng’s Beauty franchise <美人系列>. The drama is a fictional retelling of the biography of Hong Taiji (Hawick Lau), the first Emperor of the Qing Dynasty. Beauty Without Tears is currently airing on mainland China’s JSTV. Beauty Without Tears is Hawick’s first try at portraying an emperor. “I’ve always had dreams of myself being a king, and this drama helped me fulfill it!” cried Hawick excitedly. “It was very fun!”

Out of the plethora of actors whom had portrayed emperor roles in the past, Hawick expressed that his favorite was Chen Daoming’s (陈道明) Kangxi from the 2001 Chinese television drama, Kangxi Dynasty <康熙王朝>. “Teacher Chen Daoming’s Kangxi left me a very deep impression. He is so small, yet his aura is so strong and big.”

Hawick’s portrayal of the legendary Hong Taiji in Beauty Without Tears also made him realize that being an empire’s most powerful leader may not be so great after all. “It is absolutely tragic. When he really falls in love with someone and wants to spend time with her as much as you can, he begins to realize that the reason she was close to him to begin with was for revenge.  He may have an entire army under his command and all the government officials bowing at his will, but none of them can be his true friends. He has nowhere else to put his secrets except inside his heart, and in the end, he becomes cold, heartless, and empty.”

Hawick announced that he is dating Yang Mi to the world in January 2012, and the couple had never been happier to be together since. Breakup rumors and cheating rumors constantly plague the couple, but the obstacles only made their relationship stronger.

Hawick revealed that Yang Mi often visited him on the set of Beauty Without Tears. The drama’s lead actress, Yuan Shanshan (袁姗姗), is Yang Mi good friend and classmate. “She knows more about my costars than I do,” said Hawick. “It’s why she always comes and visit.”

“Because both of us are actors, it is very convenient for us to meet up on the set. This is how we communicate. We will try our best to spend as much time as we can with each other.”

Asked if Hawick has any plans for the New Year, Hawick revealed that he will be returning to Hong Kong to visit his family. He also hopes to reduce his workload next year so he can spend more time participating in charity work.

Does Hawick’s New Year plans also include proposing to Yang Mi? Hawick laughed, “I’m planning it!  But I rather you guys focus more on our work. We are just like any other couple. We eat dinner and watch movies together. Nothing special!”