Becoming a father recently, 35-year-old actor Him Law (羅仲謙) enjoys changing diapers and feeding his daughter “Little Pearl” (小珍珠). Sharing the joys of fatherhood, Him believes his daughter has brought him good luck as he has been taking on consecutive projects.

Him and wife Tavia Yeung’s (楊怡) daughter is already two months old, making this Father’s Day especially significant for the newly-minted dad. Sharing about not being around to care for his newborn daughter, Him said, “Since her birth, I’ve been busy filming! Babies’ reactions are the most honest. Recently, I got back home and wanted to carry her, but she started crying after staring at me for a few seconds!”

Despite his fatigue after returning home from filming, Him would be sure to feed Little Pearl and help change her diapers personally. He revealed, “However stinky or messy her poop might be, I just really enjoy [the process]. My wife would get jealous and say I’m more concerned about our daughter.”

Inheriting her parents’ good looks, Little Pearl looks like a mini version of Him with her large round eyes and long eyelashes, and already knows how to express her emotions. “I felt most pained when she went for a vaccination shot recently, and started yelling the moment the needle went in!”

Asked about his expectations for Little Pearl, Him said, “As parents, our wishes for our child are really simple. I only wish for her to be happy and healthy–the rest really doesn’t matter.” 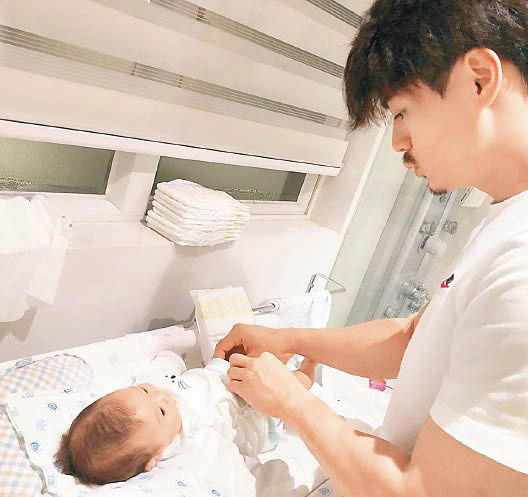 While he needs to film on Father’s Day, Him took Saturday off to commemorate his very first holiday with Little Pearl, along with his own father and some other family members. “I already feel blessed to have a few moments of playtime with her!” Due to COVID-19, the family did not celebrate Little Pearl’s full month. Now that the situation has stabilized, Him and Tavia intend to hold a 100-days celebration to officially introduce the little one to their extended family.

Gaining good luck from his daughter’s arrival, Him has been taking on consecutive filming jobs despite the pandemic. Armed Reaction 2020 <陀槍師姐2020> is a TVB Anniversary drama, greatly boosting Him’s chances of a Best Actor nomination. After wrapping filming for Armed Reaction 2020, he will be taking a short rest before filming for new drama Children’s Hospital <兒童醫院> alongside Linda Chung (鍾嘉欣) and Kevin Cheng (鄭嘉穎).