After getting married with Tavia Yeung (楊怡) three years ago, Him Law (羅仲謙) spent most of his time working in China to earn money and provide a comfortable life for his wife. Returning back to Hong Kong to film with TVB this year, Him enjoys spending more time with Tavia. Appearing on a talk show recently, Him revealed more details about the quirky dynamics in his marriage with Tavia.

Filming in China is not easy for Him, as he received less opportunities than more senior artistes. Realizing that he needs to work harder, Him once filmed The Monkey King 2 <西遊記> for four consecutive months. Filming required Him to wear his costume for eight hours every day and he cannot go to the washroom. When Tavia arrived at the set to visit, she was heartbroken and said, “Husband, I won’t buy any more expensive things after seeing you like this.” 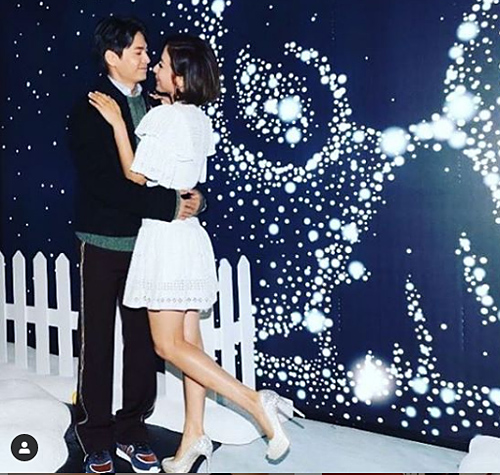 Him doesn’t stay in China longer than four months at a time as he wants to see Tavia. “Other than my wife, I miss nothing else.” However, Him eventually admitted that he also misses spicy hot pot, but Tavia will not let him have any because high cholesterol runs in his family.

Despite his frequent stays in China, Him has no intentions of permanently moving there. He considers his future children’s education, living environment, and proximity to relatives and friends.

Leading a simple life style in Hong Kong, Him doesn’t like nightlife, socializing, drinking or smoking. Tavia also likes to stay home and would dance in front of the television when she is idle.

Part of Him’s reason for spending more time in Hong Kong this year is to make sure Tavia gets pregnant. As Him’s plan hasn’t been fulfilled yet, he is often asked about his progress. Once a restaurant hostess came up to him to ask about it and Him jokingly answered, “Yes, he is five years old. We are looking for a school.”

Wants to Film with Tavia

In Him’s upcoming drama Woodthorn Witness<木棘証人>, he has several intimate scenes with Kelly Cheung (張曦雯). Although they are not very passionate kissing scenes, he is still concerned that his wife will feel uncomfortable. If the opportunity comes up, Him would prefer to film with Tavia again, but not as a romantic pair. He joked, “It’s more exciting to go against her. Using a knife to stab her [and she will use a knife to stab me].”

As for filming reality shows together, Him thinks it would be a great idea as the audience would be able to glimpse Tavia scolding Him. “With her, I enjoy it. It’s okay. She has principles.”

Him Law Remembers His Love Lessons