Him Law Remembers His Love Lessons 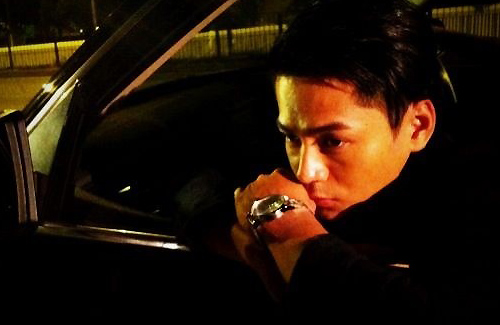 “I feel so lucky that I can still sit here to do more interviews!” cried Him Law (羅仲謙) as he proceeded to do his first sit-in interview of 2013. “I’ve never tried hitting the headlines before, and I definitely was not expecting their effects to be that powerful. I have never gotten hurt, so I never knew how serious the pain can be. I’ve experienced it now, yet I am not afraid of getting hurt. What I am afraid of is that I would forget the pain. We must not forget our lessons of the past.”

In 2005, Him signed with Filmko Entertainment and debuted in the film Mob Sister <阿嫂>. For the next few years, Him was virtually unknown until after joining TVB in 2008. Soon afterwards, Him found himself hitting the headlines for the first time after portraying the muscular “Ken” in 2010’s Suspects in Love <搜下留情>.

“I really liked the attention at first. To step into the streets and have people recognize me and praise me for the first time… It was an amazing feeling and I really enjoyed it.” Him sighed, “That is the life of a celebrity; the recognition and appraisals slowly progress to the kind where you feel like you’re being watched all the time, like you’re a circus monkey, allowing people to stare at you and snap photos of you at every moment. When two people have problems with each other, you have to explain it to the whole world. The hardest part of being a celebrity is that you have to bear all kinds of criticism. This is the life of a public figure. You may earn higher income than others, but you also sacrifice more than others. You have to take in all the good and bad things.”

Him’s first major “pain” in the industry was when his ex-girlfriend, Theresa Fu (傅穎), reportedly called him a “woman beater” and accused him for cheating and physical abuse. Theresa claimed that she consistently confronted Him about his cheating with other women during their former relationship, and in a violent break up argument, Theresa was beaten by Him.

Him explained over and over again that the reports were exaggerated. Him especially found the cheating accusations horrendous. “No! Absolutely not true!  First, I don’t have that kind of ability. Second, I believe in retribution. If you are not dedicated to someone, then others will not take you seriously either.”

Him learned many things after the Him vs. Theresa fiasco broke out, but his biggest lesson learnt was that a celebrity should never be too high-profile. “There are some things that should be kept hidden. You can’t control your feelings, but next time, I would try my best to not date a colleague from the same company.”

When Tavia Yeung’s (楊怡) name was announced from the stage as the winner of the TVB award for Best Actress of 2012, Him burst into tears. The media teased Him for having a sensitive heart.

“I also cried when Koo Ming Wah (古明華) and Oscar Leung (梁烈唯) won!” explained Him. “No one said anything about that!”

Him and Tavia’s dating rumors began after filming The Hippocratic Crush <On Call 36小時> in late 2011. From catching a plane together to South Korea, to sneaking car rides together to each other’s homes, Him and Tavia could not seem to avoid getting caught by the paparazzi. Regardless of the intensity of their rumors, both Him and Tavia insisted that they were just very close friends, even after their car-shaking incident was exposed.

Him grimaced whenever the words “car” and “shaking” were uttered at him. “I’ve learned a valuable lesson out of it,” he said, “that I should always prepare myself for the worse whenever I go out. As a public figure, you should never doubt that you are being followed.”

Now that Him and Tavia’s relationship have become an open secret, why is Him still not admitting their relationship? “Because at this stage, there is nothing to admit to,” Him said. “I believe that if a man doesn’t have his career or his accomplishments, it is better for him to keep his mouth shut. If he doesn’t have a career foundation, he is dating for nothing. My parents separated when I was very young. They started a family when they were barely into adulthood and not yet emotionally mature. They were not economically stable, so naturally, there would be arguments. Because of them, I’ve learned to hope for a complete family, my own complete family, and I want to be with someone who is willing to walk with me to the end.”

As 2012’s TV Queen, Tavia is not just older than Him, but also much more successful than Him. Tabloids describe Him and Tavia’s relationship as “woman on top.”

“I may be five years younger, but that doesn’t mean I am immature and naïve,” said Him. “I don’t feel inferior, and I can’t see why I should feel that. This industry makes you grow older much faster. I am not who I used to be.

Currently actively doing promotional tours for his new film, Young and Dangerous: Reloaded <古惑仔:江湖新秩序>, Him had no time for rest during the Christmas and New Year holidays. The film will have its red carpet premiere in Hong Kong on January 8.

When the poster of the Young and Dangerous: Reloaded was released, the online community criticized the movie for looking “gay.” Male leads Him and Oscar Leung were also blasted for looking like gigolos.

Him explained, “We wanted the film to be closer to the comics. The original characters were all very muscular! The times have changed now. When the original came out, no one thought Ekin Cheng (鄭伊健) and Jordan Chan (陳小春) looked like gangsters, but they created a classic. A classic will always be a classic. We are not challenging the classic, nor are we trying to replace it. We just want everyone to give these young actors a chance!”

Although not a managed artist, TVB treats Him as one, such as casting him in major blockbuster productions like Triumph in the Skies 2 <衝上雲宵II>. However, Him still considers himself be in the “sowing” period of his career.

“I knew that the competition was ultimately between Oscar and me,” Him said as he recalled his nomination for TVB’s Most Improved Actor last year. “When I watched Oscar’s dying scene in The Confidant <大太監>, I knew I lost. I was so happy when he won. It was well-deserved. The next thing I knew, I was tearing up.

“I know how hard it must have been. I knew it had been a difficult road for all of us. We are all worked liked farmers. I know how it feels to film day and night, nonstop for three months. By the time you’re done, you are left with no soul. We all need rest. We all need to have enough time to let go of our previous roles to accept another so we can perfect our performances. This is not a game. It took tears and sweats to get to where we are today, and we all need some awards for encouragement.”

99 comments to Him Law Remembers His Love Lessons