Him Law (羅仲謙) and Tavia Yeung (楊怡) fell in love after collaborating in the drama The Hippocratic Crush <On Call 36小時> and got married after dating for five years. While the couple’s sweet relationship is envied by many fans, Him revealed that it was not an easy task to pursue Tavia and revealed a shocking story of how he had asked Tavia to be his girlfriend.

Dared to Jump Into the Sea

Appearing in the the variety show, Liza’s Online <娛樂大家>, Him participated in the “True or False” game and had celebrity guests guess if it was true that Him once “pursued a girl by jumping into the cold sea in the middle of the night.” Although Him did not disclose the identity of the girl he was pursuing, he was forced to confirm it was Tavia after Liza Wang demanded an answer. 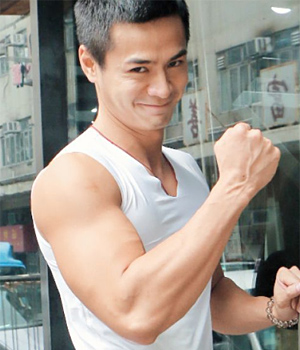 Sharing that he was on the beach with Tavia at the time, Him explained what happened, “She dared me, and she didn’t believe that I would actually dive in.”  At the revelation, Liza commented that Tavia is very headstrong, but felt it wouldn’t have been difficult for Him as he is a good swimmer and was also a swimming coach.

Wanting to impress Tavia, Him stripped down to his underwear, jumped into the cold water and swam out to the sea in the middle of the night. As Him swam, he made sure to confess his feelings and shouted to Tavia, “Will you be my girlfriend?”

However, when Him swam back to the beach, he did not get an answer from Tavia. “It was disappointing. I didn’t know if she was satisfied [with the confession].” Him shared that he regretted his decision to jump in the sea because it was dangerous and there wasn’t any lifeguard.

Though many celebrity guests were split on believing Him’s anecdote, Liza chose to believe Him and stressed, “He really loves Tavia.” Liza’s intuition was proven correct and Him’s anecdote was in fact a true story.

As the celebrity guests laughed at Him’s antics to pursue Tavia, they were in disbelief that he didn’t try to embrace Tavia and get a reaction from her. In reply, Him joked, “If I have done that, she would have thought I was a pervert. I was only wearing my underwear!”

What Him Went Through to Prove His Love for Tavia

Tavia Yeung Admits Dating Him Law After Caught in His Lap