Him Law Hints that Tavia Yeung May Be Pregnant 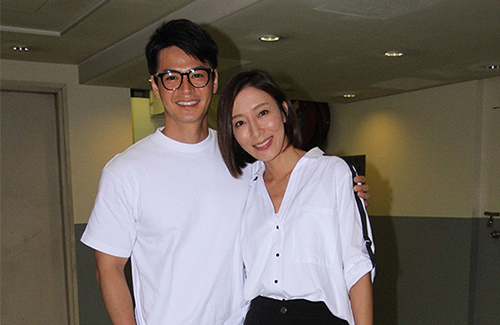 Busy with the filming of his TVB drama Thorny Witness <木棘證人>, Him Law (羅仲謙) hasn’t had the time to celebrate his third wedding anniversary with Tavia Yeung (楊怡), which fell on October 12th. But the couple are in no hurry to make up for the lack of celebration, because they may have something else to celebrate.

Attending a jewelry brand event, Him was teased about his dreams of becoming a dad, which prompted the 35-year-old to drop the big hint—it may be coming soon.

When asked if Him and Tavia would leave town to celebrate their anniversary and “make babies”, Him said, “No need to. If you want to make babies you can do it at home. (Does that mean it’s a success?) Even if it’s a success, I’m not going to say it. You’ll have to wait three months.”

Seeing that he has dug a deeper hole for himself, Him turned embarrassed and said he doesn’t know if he has good news to announce. “Ask my wife,” he said.

After completing Thorny Witness, Him will be staying in the mainland for two to three months for another film project. “Fortunately, it’s going to be within the Guangdong Province, so it’ll be close to Hong Kong,” he said. “But even if I get to stay at home, I’ll be too tired to make babies,” he added with a laugh.

Nonetheless, he insisted that he and Tavia are working hard to chase after a child, even though he’s never home. “She wouldn’t let me rest,” he said with a laugh. “She’s practically my manager, comparing the pay of each job to see if it’s worth it for me to take it or not.”