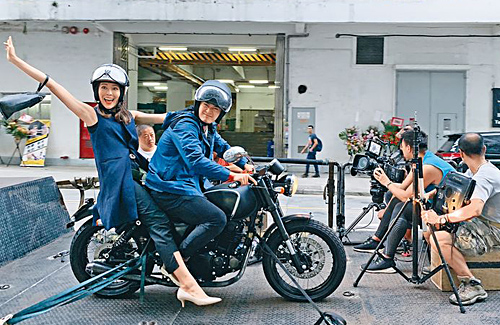 Replacing Ali Lee (李佳芯) in the sequel to drama Legal Mavericks<踩過界> is 29 year-old Kelly Cheung (張曦雯), widely thought to be the next fadan heavily promoted by TVB. Also headlining another upcoming drama The Witness <木棘証人> alongside Him Law (羅仲謙), Kelly was praised by the actor for showing high IQ and EQ.

First Collaboration Between the Two 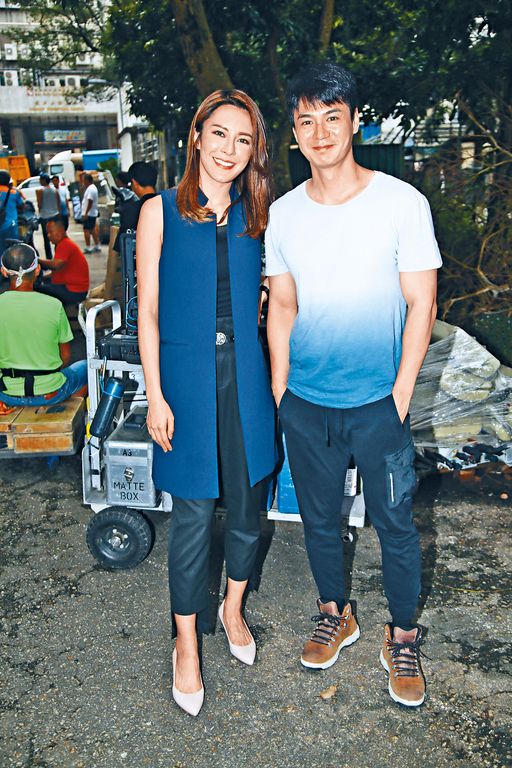 A recent scene for The Witness <木棘証人> narrates how Kelly, who plays a lawyer, secretly follows a triad lady boss for her work, but ended up being discovered and pursued by the latter’s underlings. Fortunately she was rescued by Him’s character who comes on a timely motorbike.

A small drizzle on the day of filming did not daunt the two artistes. “I had to run around in heels from 7 a.m. until noon. Although I had to hide in the dustbin area, those were actually props and so they were really clean!” said Kelly, who had to squat behind a huge dustbin while hiding from the triad members. Being a rather light-hearted role, Kelly shared that her lawyer character liked to reason and was rather talkative, so filming the role wasn’t stressful for her and she particularly enjoyed some humorous parts.

Although Him plays a policeman in the drama, his action scenes were not numerous. However, Him required a professional stand-in actor when he had to escort Kelly from danger on his motorbike, since he did not own a license. He contemplates getting his license so he can film such scenes himself in the future.

When asked if he had shared pointers with Kelly, who has less experience, Him laughed, “Just that little bit more of experience. I wouldn’t dare [teach] her! I picked up much from her instead.” When Kelly added that she had often consult him and received advice regarding different aspects of filming, he said, “I asked the director on her behalf…and taught her about all the minute matters, such as how to film through the night and communicate better with the crew.”

Not Afraid of Comparisons to Ali Lee

Ali Lee, who had won Best Actress for her performance as a new mom in Who Wants A Baby? <BB來了> and was originally heavily promoted by TVB, had her roles replaced due to posting online about the controversial political situation in Hong Kong.

Scoring in both her looks and figure, Kelly Cheung looks to be the new actress promoted heavily by TVB.  Assigned many other roles in addition to replacing Ali in Legal Mavericks 2, Kelly is thankful for the chances given and would do her best to fulfill her work assignments. “I play mostly guest-starring parts in the recent dramas airing. It’s actually not as much as everyone says.”

As for the inevitable comparisons viewers would be making between her and Ali, Kelly replied, “I feel that there is nothing to compare in this line. Besides Ali, there are many other artistes. It is a good thing if everyone performs well.”

When Him was asked if he felt that Kelly had the potential to be the next fadan, he praised her intelligence and jokingly replied, “I’ve already seen her high EQ during day-to-day interviews. She’s earnest, and has good EQ to boot! So I think she surely has a good future ahead; I might have to earn a living from her sometime.”

Kelly Cheung is Really a Tomboy Behind Glamorous Image