Kelly Cheung is Really a Tomboy Behind Glamorous Image 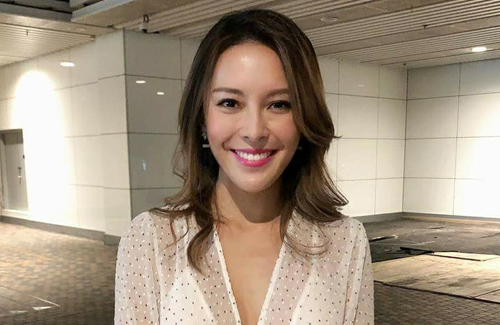 Twenty-eight-year-old Kelly Cheung (張曦雯) has exploded into the spotlight after her role in Life on the Line <跳躍新生命線>. She is the new favorite of netizens due to her beautiful features, sexy figure, great cooking skills, and passion for gaming. With the explosion in popularity, her job opportunities have increased.

No Chemistry with Bosco Wong

She is currently filming Flying Tigers 2 <飛虎> and will be playing the role of a special agent in a romantic relationship with Bosco Wong (黃宗澤). When asked if she was nervous about sparking rumors with Bosco, she hinted that there was no chemistry: “We’ve actually known each other for a while because we used to share the same manager. We just returned from filming in England and it was okay, nothing going on between us.”

Kelly is most known for being the winner of multiple pageants. “When I was really young, my dream was to become Miss Hong Kong. I would parade around with a towel as a cape and a hat as my crown. However, when I grew up, I started to become more of a tomboy. I actually wanted to attend Le Cordon Bleu and become a chef.” It seems that her passion never died as Kelly’s appearance on Cooking Beauties <美女廚房> shed light on her cooking abilities. “Since moving to Hong Kong, I had to quickly become independent so I learned to cook simple Chinese dishes. I also enjoy baking because it is an activity that requires a lot of focus. It helps me forget any worries and melts away my stress. The only thing I hate is cleaning the dishes after!”

Even though it was young Kelly’s dream to become Miss Hong Kong, she had initially balked at the idea. “I had worked as a model for two years and I thought that by winning the title it might expand my job opportunities. Turns out after winning, you have to come back to compete in the Miss Chinese International pageant. By joining the competition, I had to terminate my contract with my modelling agency. I was hesitant to do so but my mom told me to give it a try.” Afterwards, Kelly went on to compete in the 2012 Miss World competition, making her the third participant ever to represent Hong Kong after Michelle Reis (李嘉欣) in 1988 and Sonija Kwok (郭羡妮) in 2000.

After her reign as Miss Chinese International, she signed on with TVB and became a TV host/MC for Dolce Vita <港生活·港享受> and the Scoop <東張西望>. “This was a really difficult job for me because my Cantonese was not the greatest and I’m not good with public speaking. Every time I would finish a job, I would go home to cry due to the stress. However, this was the greatest motivation for me to improve. Even though you won’t become famous working as an MC, the jobs helped me earn a lot of money so my life so far has been comfortable. I’ve always wanted to try acting because I felt that I wasn’t that great at being an MC. Also, I would be portraying the life of someone else when acting and this puts me at ease.”

When asked which artiste she would like to collaborate with, she answered, “Charmaine Sheh (佘詩曼)! I heard from Samantha Ko (高海寧) that she is really nice and takes cares of newcomers. It would be great if I had an opportunity to learn from her!”

Unfortunately, increased popularity comes hand in hand with rumors. Netizens have been digging up old photos and speculating whether Kelly had undergone plastic surgery. She denies this, stating, “The photos that are floating around on the Internet were taken at the worst time possible. I didn’t know how to apply makeup and was also slightly chubby. It’s a shame that everyone only focuses on those photos!” It turns out that when she was 16, she weighed 147 lbs because she would constantly snack on chocolates. It had gotten to a point where even her father advised for her to lose weight.

Kelly also shared that she used to be a huge tomboy, she played a guitar in a band and all her friends were boys. “I would always go to rock concerts, my hair was dyed half blond, half black and I had a tongue piercing. I was pretty crazy back then and I looked completed different compared to my current image. It seems that I am very quiet and ladylike but because I have a younger brother, we grew up playing video games. This is completely normal to me so I was surprised when my live stream of me playing Resident Evil 7 had so many views!”

When asked what she is looking for in a partner, Kelly indicated that she is not in a rush and prefers to meet someone naturally, “I’m able to take care of myself financially so I don’t require for them to have lots of money but they should at least be on the same level as me. I find men that are strong and independent very attractive. Any nationality is fine, it would be best if they were taller. I also look for men who are filial, nice, and are not calculating. The entertainment industry is complicated as is, so it would be nice to find someone simple in nature. I feel that I would have a tough time dating someone in the industry because there would be too many beautiful women around him!”