Him Law to Treat Tavia Yeung for Birthday Dinner 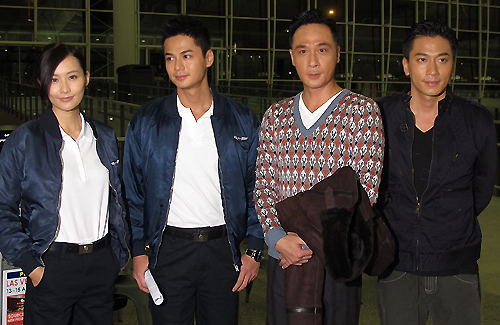 TVB’s filming of Triumph in the Skies 2 <衝上雲霄II > is well underway. The cast, including Francis Ng (吳鎮宇), Fala Chen (陳法拉), Him Law (羅仲謙), and Ron Ng (吳卓羲) caused a frenzy at the Hong Kong International Airport yesterday when they arrived to catch a flight.

Since Francis was in the original series and the actor with the most seniority amongst the cast, when reporters asked him what he thought of fellow castmates Fala and Him’s acting, Francis chose not to comment. Francis felt that they did not have enough time working together yet, and it was not fair for him to judge.

While the cast was responding to press questions about their feelings on the results of the 2012 Miss Hong Kong Pageant, Him Law answered inquiries regarding rumored girlfriend, Tavia Yeung’s (楊怡) 33rd birthday celebration.

When asked what day was August 30, Him immediately responded, “Tavia Yeung’s birthday.”  Asked how he will celebrate Tavia’s birthday, Him said, “Not much, treat her to dinner. I sent a birthday greeting via text message. Since both of us are working, we have to schedule time to meet first.” Drilled on whether he intended to take Tavia on a romantic dinner date, Him responded, “I enjoy liveliness. The birthday girl will decide.”

Although teased by reporters as to whether he had given Tavia a ring for her birthday, Him dodged questions on the birthday present he gave Tavia.

It turns out that Him and Tavia’s birthdays were only days apart. Him turned 28 years old on August 28. He had to film Triumph in the Skies 2 on his birthday and did not have an elaborate celebration. After returning home, Him stepped outside mysteriously for half an hour. Claiming that he has not yet received a present from Tavia for his birthday, Him said, “I will ask her for it later!”

Jessica Hsuan Wished to Film “Triumph in the Skies 2”

Jessica Hsuan was in another studio giving an interview and actually confessed that she recommended herself to be cast in Triumph in the Skies 2! Jessica admitted that she recommended herself for the series. Unfortunately she was not under contract with TVB at the time and had obligations to sponsors, thus she regrettably could not join forces with Francis Ng and Chilam, two actors whom she enjoyed working with before. Jessica said that she hopes they will have the opportunity again in the near future.