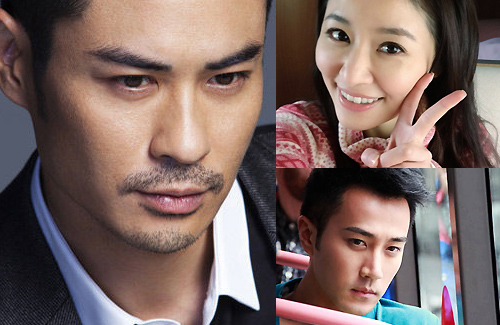 This is why many Hong Kong and Taiwanese artists have left their homelands to pursue much more profitable careers in mainland China.

A decade ago, Hong Kong artists with “damaged” public images were often “banished” to mainland China so they could be temporarily hidden from the Hong Kong media spotlight. It was common knowledge at the time that those who left their Hong Kong careers for mainland China were seen as disappointments of the Hong Kong entertainment industry. Recent examples include Edwin Siu (蕭正楠), who gave up his singing career in Hong Kong after he delivered a controversial speech at the JSG Music Awards in 2003; and Hawick Lau (劉愷威), who failed to land leading roles during his stay at TVB.

But Chinese television culture has changed. As the world’s second largest entertainment sector, mainland China is shining as bright as gold. Those who maintain long-lasting careers in mainland China’s television market are no longer considered as failures and are instead beheld as successful and profitable superstars of the Greater China entertainment sector. Current rising TVB stars often express their hopes to move their careers to mainland China, a place where real money can be truly earned.

Take Hong Kong’s Kevin Cheng (鄭嘉穎), for example. For years, Kevin had to rely on producer Amy Wong (王心慰) to give him juicy leading roles in Hong Kong dramas. The heartthrob broke out in 2009’s palace drama Beyond the Realm of Conscience <宮心計>, which brought him to the interest of many mainland Chinese casting producers. Nonetheless, it was actually 2011’s Bu Bu Jing Xin <步步驚心> that turned Kevin into a big television star in mainland China. His TVB Best Actor win for Ghetto Justice <怒火街頭> in December 2011 further cemented his star status, and Kevin is now earning at least 350,000 RMB per episode in mainland Chinese productions. That is at least ten times more than what he could have earned in an episode of a TVB blockbuster.

A more iconic example is Hawick Lau, who had struggled in TVB’s confined industry of many years. After moving his career to mainland China in 2005, Hawick was pushed from being a second-tier actor to a leading star; the mainland China-based actor now earns at least 350,000 RMB per episode.

In a monopolized television industry like Hong Kong’s, greater popular demand for an artist does not necessarily lead to a pay rise. TVB’s strong hold as the leading exporter of Hong Kong television entertainment stagnates their artists’ salaries. In this case, artists who are high in demand elsewhere in Asia like Raymond Lam (林峯) and Gallen Lo (羅嘉良) have no choice but to leave for mainland, where the market is much more competitive and dynamic.

Twenty years ago, Taiwan’s Jimmy Lin (林志穎) described his filming experience in mainland China as “terrible, lonely, and harsh.” He recalled, “[Hengdian World Studios] was empty and desolate, with poor hotel service and terrible traffic. But now, let’s just say that I am always excited to come back.”

Taiwanese actress Ady An (安以軒) also agreed with Jimmy about Hengdian’s improved working environments. “When I first came, Hengdian was completely empty. The cast and crew would rather eat take-out or home lunches than to eat at the restaurants on the streets. The electricity at the hotels we lived in always went out. The first night I screamed. The second night I also screamed. I got used to [the darkness] on the third night. The environment in Hengdian now is much better. More relaxing and less stressful.”

The mainland Chinese television industry may be regarded to be the next California Gold Rush, but the market is not without its flaws. Typecasting remains to be a troubling issue for many Hong Kong and Taiwanese artists, and thus, acting performances and creative brainstorming would have to be compromised.

After fourteen years, Jimmy Lin is still struggling to find roles that stray away from his Xiaoyu’er role in the 1999 wuxia drama, The Legendary Siblings <絕世雙嬌>. Jimmy said, “I had a lot of scripts offered to me after [The Legendary Siblings], but most of them were costume dramas. It got to the point where I was beginning to hate my work. Costume dramas are tiring with long filming schedules. It is also a lot harder for me to find another break in my acting. When I was offered to do a Republican-era drama, I immediately said yes. It’s neither an idol drama nor a historical drama, and I was able to test the waters, to see if I would be able to search for another breakthrough in my acting career.”

In addition, Hong Kong and Taiwanese actors have to stress through cultural and language differences when pursuing a career in mainland China. Taiwanese actor Steve Ma (馬景濤) disclosed that whenever he filmed in mainland China, two separate scripts had to be provided for the crew – one written in simplified Chinese, the other in Traditional Chinese. Furthermore, Hawick Lau confessed that besides struggling with reading simplified Chinese characters, he also wrestled with learning Mandarin. “When I first came, the only thing I knew how to say in Mandarin was my name. It was hard to communicate with others. I practiced Mandarin with the crew members and forced myself to watch the news every chance I had.”

Hawick added, “It was also hard for me to order food at a restaurant. If the menu doesn’t have a photo of a certain dish I wanted, I would try to communicate with the waiter by using hand motions or just draw them out on a piece of paper. For example, if I wanted to eat chicken drumsticks, I would draw out a chicken and then point at my thigh.”

Creative setbacks for Hong Kong and Taiwanese artists are imminent in mainland China, but with perseverance and patience, such limitations can easily be overridden. Recently, an increasing number of Hong Kong and Taiwanese artists have established their own production studios in mainland China, securing their influences in behind-the-scenes efforts of a production. Taiwan’s Ruby Lin’s (林心如) Ruby Studios has invested in six television dramas since its formation in 2008. Nicky Wu’s production studio was also the main creative force behind 2012’s The Bride with White Hair <新白髮魔女傳>. Their productions received mixed to negative reviews from critics, but the popularity of their series have fully established Ruby and Nicky to be top earners in the industry.

Hawick Lau is also achieving success as a producer – his first television drama as producer, Sheng Xia Wan Qing Tian <盛夏晚晴天>, is a number one hit in the nation, entrenching Hawick’s critical success in the ever-growing entertainment industry. Kevin Cheng is also jumping onto the producer bandwagon as well, and the award-winning actor is now on his way to open up his own production studio.