At 57 years old, Donnie Yen (甄子丹) is still in amazing shape. Although the six pack abs and bulging biceps won’t stay forever, the martial arts star has emphasized the importance of maintaining physical activity to stay not only young on the outside, but also in the inside.

“Age is nothing but just a number,” he said.

Donnie would go to the gym at least two times a week. To maintain his muscle mass and shape, weight training is a must. To not overexert any muscle, it is important to train to one’s capability and casually build up the weight to tolerance. Before lifting, Donnie would complete a five to ten-minute dynamic cardio warm-up. After training, Donnie would spend five to ten minutes  stretching his limbs to release the tension on his muscles. Stretching is the most important process to weight training, as it decreases the likeliness of injury. It is even more important for Donnie, who does his own stunts. 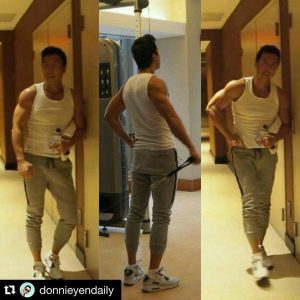 Occasionally, Donnie would engage in a heavy bag training session to challenge himself, punching and kicking a heavy bag over 10,000 times. The sessions would get quite intense, as Donnie himself had shared that he once kicked the bag up to the ceiling.

“Only those with strong willpower can train a beautiful body,” he said.

Diet is also a very important aspect to weight training. If anything, it is the most difficult process to anyone’s body-building journey.