Faye Wong (王菲) is well-loved by fans for using her angelic voice to sing both the joy and challenges of love and relationships. Like her music, Faye’s personal love life was not easy, and it cost her two divorces before finding happiness again with boyfriend, Nicholas Tse (謝霆鋒). 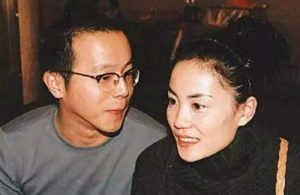 Soon after moving from Beijing to Hong Kong, Faye met Dou Wei (竇唯), a member of the rock band Black Panther. Although Faye was madly in love, it was the start of her troubling relationship as Dou Wei had another girlfriend at the time. The love triangle exhausted Faye, who distanced herself from the relationship by leaving for the United States to study music.

When Dou Wei finally ended his relationship with his girlfriend, Faye often flew to Beijing and moved in together. At the age of 27, Faye gave birth to their daughter and married Dou Wei. The couple’s marriage ended after three years, when Dou Wei cheated on Faye with a photographer.

In 2000, Faye who was 31 years old at the time, fell in love with Nicholas. As Faye was older than Nicholas by 11 years, the public disapproved of the relationship as it was taboo for an older woman to date such a younger man at the time.

Faye and Nicholas dated for a year despite the public’s judgement. However, the couple broke up when  Nicholas got involved with now ex-wife Cecilia Cheung (張柏芝). While Faye was hurt by the breakup, she put a brave front and carried on with her life. 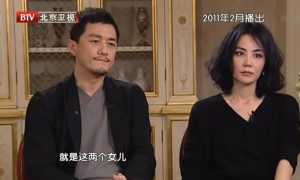 While Faye worked to move past her failed relationship, fate bought Li Yapeng (李亞鵬) into her life. The Chinese actor fell in love at first sight when he saw Faye on the stage, and went to great lengths to pursue her. Touched by Li Yapeng’s sincerity, Faye eventually agreed to marriage and after giving birth to a daughter, she slowly faded out of the music scene.

Although the couple had high respect for each other, their personality differences made it difficult to uphold their marriage. When they filed for divorce after 10 years together Faye clarified that the divorce was amicable, “The divorce was my choice. There was no third-party, no discord with in-laws, no financial troubles or bad blood. The peaceful breakup is just another way to get along. To my children, I say we are still a family.”

Despite two failed marriages, Faye still believed in love. One year after her divorce with Li Yapeng, Faye reconnected with Nicholas, who had also gotten divorced. Though they had split for 11 years, it was the perfect timing for Faye and Nicholas to reconcile as both had matured through the years.

Grateful to have another chance to be together, Nicholas gave a rare glimpse of his feelings for Faye when he guested in Jay Chou’s (周杰倫) travel program J-Style Trip <周遊記>. Nicholas revealed what he liked best in Faye by drawing comparisons to Jay’s personality. Nicholas said, “Jay Chou is a cute person. I really like simple people, but there are fewer of them in the world. I know he is actually a simple person. Jay and Faye Wong are similarly simple.”