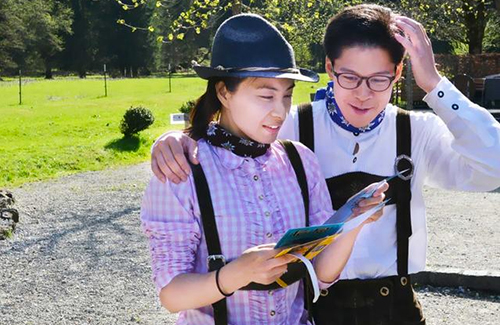 They were an unlikely pair. One is a rich businessman from Hong Kong, the other is an Olympian diver from Mainland China. One spoke broken Mandarin, the other didn’t understand Cantonese at all. Just how did Kenneth Fok (霍启刚) and Guo Jingjing (郭晶晶) come together?

In the latest episode of The Amazing Race: China Rush <极速前进>, Kenneth and Jingjing talked about their romantic first meeting. It started with the 2004 Summer Olympics in Athens, Greece, where Kenneth went to witness live. Kenneth didn’t know who Jingjing was at the time until he returned to Hong Kong and saw replays of Jingjing diving. Kenneth said he was captivated by Jingjing’s talent and skill.

When the Olympics were over, Jingjing and her team went to Hong Kong for a press conference and a celebrity banquet. Kenneth was also there, and introduced himself to Jingjing as a fan. He then requested a photo with her.

In their second meeting, Kenneth asked for another photo with her. She recalled, “I remembered him because he wore glasses. I told him, didn’t you already get a photo? He told me that it was someone else so he never got one.”

Kenneth smiled and said, “Yes, I did that on purpose.”

Asking Jingjing for her thoughts on Kenneth when she first met him, she admitted, “He’s very polite. The glasses looked interesting on him.”

When Jingjing traveled to Macau for her team, she bumped into Kenneth again. “I was holding a lot of bags, and then he suddenly showed up next to me and asked me if I needed help. I was like, wasn’t he the guy who I took a photo with two times before? The trip to Macau was about an hour, so we chatted the entire time.”

Kenneth said, “I knew Jingjing would be going to Macau, so I went. I asked her for her phone number. A photo wouldn’t be enough. To chat with her, I really practiced my Mandarin!”

The Hong Kong businessman expressed that, because they were in a long distance relationship at the time, they would always communicate with each other over text. The couple communicated in English at first; having grown up in England, Kenneth was never very skilled at typing in Chinese.

“We didn’t have smart phones then. We were still using those phones with the qwerty keyboard. I never typed Chinese before, but I could write it stroke by stroke. Sometimes she would ask me why it took so long for me to reply, and that’s because I write slow. I then decide to learn pinyin so I could reply quicker.”

Kenneth and Jingjing married in November 2012 welcomed their first baby, a boy, in 2013. Jingjing said marriage has taught her how to prioritize relationships. Kenneth also likes Jingjing’s simplicity and realism.

Despite the couple being a hot subject for gossip magazines, Kenneth and Jingjing have managed to maintain private lives over the years. They prioritize their son over anything else.

“Kenneth is a very responsible father,” said Jingjing. “He would always come home to see the baby no matter what. Even if he has a social event to go to, he’ll use that 20-30 minute window to go home and see his son.”