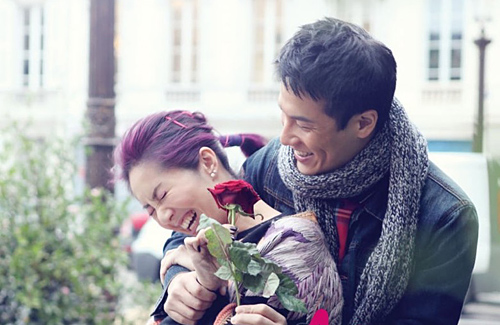 In the drama Wonder Women <多功能老婆>, Miriam Yeung’s (楊千嬅) character learns to find her confidence again after she discovers her husband cheated in their marriage. Unlike her drama, Miriam has a strong marriage with her husband Real Ting (丁子高) and the two build their relationship with trust and understanding. Though Real admits that the couple would sometimes quarrel, they would find ways to mend their differences to maintain their loving relationship.

Reflecting on their marriage, Real shares, “It is impossible to be married for 10 years and not quarrel, but [the quarrels] are not serious. When I’m not happy and upset, we would immediately separate. I would walk around the park. I feel that when I lose my temper to discuss something, it would only hurt our feelings. We don’t have cold wars. Our problems don’t linger overnight because the longer a cold war exists, the more damaging it is to the relationship. It’s pointless.”

Real shares his advice for resolving conflicts, “However the conflict is resolved, throwing a tantrum is not right. We would say sorry. Sometimes she would say it, and sometimes I say it. Sometimes the issue is not the main point, and a bad attitude will make things worse. A couple should not let their pride grow too big. It’s silly.”

Real feels it’s important to understand and respect each other’s bottom lines, “If you love [her], you won’t think she’s annoying even if she has 100 bottom lines.”

When Miriam expressed trust in Real and their marriage, he also shares the same sentiment, “Cheating will not happen to me. I also 100% believe that Mrs. Ting will not cheat on me.” Real understands that cheating will negatively affect his family and career, as well as hurt his son’s image of him.

Analyzing why men would cheat, Real offers the following explanation, “Cheating has nothing to do with being old or young. Cheating is very immature. People who cheat only love themselves and just care about themselves.  If a person is mature, he would respect and love his family.”