Hu Ge (胡歌) is rumored to star as the main male lead in the upcoming fantasy Chinese drama Novoland: Pearl Eclipse <九州斛珠夫人>, which was first announced in November 2018 by Yang Mi (杨幂). Based on the book of the same name by Xiao Ruse (萧如瑟), rumor has it that Pearl Eclipse will commence production as early as this week, on January 12, 2019.

Set in the fictional universe of Novoland, a world dominated by mythological races and powerful beings, Novoland spans 30 novels with 7 main authors. Pearl Eclipse tells the story of a young Oceanider mermaid who survives a genocide after an enemy race tried to search for a magical pearl from their tribe. 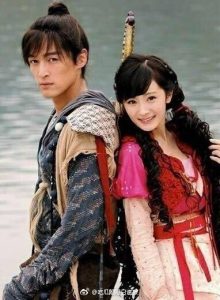 The studios behind Pearl Eclipse have kept the production schedule in tight wraps, but according to an online leak, an upcoming untitled television drama which will begin production on January 12 had already released a memo about hiring nearly 500 background actors. The memo listed age requirements (between ages 17 and 45), a meet-up time, a compensation plan, and an available catering service for the extras.

While some netizens are speculating that the untitled television drama would be Pearl Eclipse, many of Hu Ge and Yang Mi’s fans deny the possibility. A Hu Ge fan said, “Hu Ge would still be doing the play A Dream Like a Dream <如梦之梦> on the night of January 12th.”

Yang Mi, on the other hand, has been shooting the movie Assassin in Red <刺杀小说家> and is confirmed to begin work on Once a Youth <曾少年> soon.

It has been discovered, however, that Pearl Eclipse was approved in 2017 to start principal photography in March 2018, though official filming has yet to start.