Huang Xiaoming and Angelababy to Wed on October 1 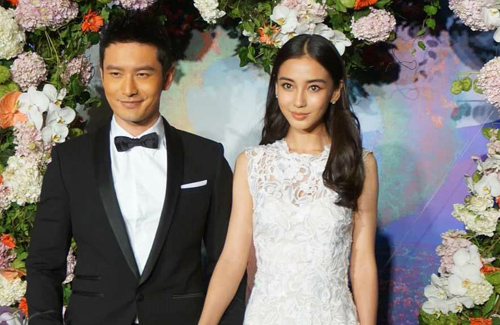 After dodging countless rumors regarding their engagement status, the couple finally announced the details of their upcoming wedding. Because Angelababy has always dreamed of having a fairy tale wedding, Huang Xiaoming scrapped his plan of holding the ceremony in his hometown of Qingdao and instead splurged for a dream wedding on a small island in France.

Xiaoming picked the date, October 1, which coincides with the National Day of the People’s Republic of China, because he has always felt that the date was very meaningful. Moreover, many of his business friends will be able to attend the wedding since it will take place on a holiday. Several hundred friends and family members are expected to attend.

On Xiaoming’s 36th birthday two years ago, the couple had already held an unofficial engagement party, during which Angelababy dressed up like a bride in order to give her boyfriend his birthday cake. The actual wedding proposal, however, proved to be much more romantic.

This past February 28 was Angelababy’s 26th birthday and also marked the one-year anniversary since she and Xiaoming officially went public with their relationship. On that day, Angelababy happened to be in the United States with Xiaoming, who was filming the movie You Are My Sunshine <何以笙簫默> with actress Yang Mi (楊冪).

In order to surprise his girlfriend, Xiaoming arranged a secret birthday party, where he proposed to her with a six-karat diamond ring. He had also flown many of Angelababy’s close friends to the United States in order to celebrate with her.

Not expecting the proposal, Angelababy was shocked and moved to tears – which may happen again on the day of the actual wedding. Rumor has it that Xiaoming, who knows how fond Angelababy is of roses, has already ordered an arrangement of 10,000 roses for their wedding ceremony.