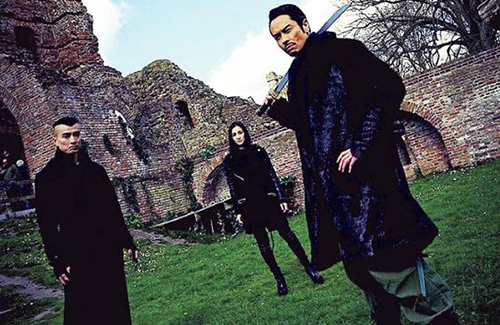 Produced by Joe Chan (陳維冠), Blue Veins was first announced in late 2014. Principal photography took place between January and June 2015, and was partially filmed in the Netherlands. The role of Ying Wut-cheuk was tailor-made for Kevin, who shares many similarities with the character.

“He is a man who has lived through hundreds of years,” introduced Producer Joe Chan. “The role really needed to be someone who has a face of experience. In many ways, the character is very similar to Kevin himself. He has a sharp tongue.”

Although not a rookie when it comes to acting, Blue Veins is Kay’s first attempt at tackling a lead role in a television drama. Joe said Kay’s husband, Louis Cheung (張繼聰), had a part in convincing Kay to take the role. “It’s been over ten years since Kay’s debut. This is an important part of her performance career and she cherishes the opportunity.”

Kay enlisted the help good friend Michael Ning (白只), HKFA Best Supporting Actor winner, for some acting advice. “Since this is her first drama, she was pretty nervous,” said Joe. “Kay told us that she’s a bit OCD, so we added that part in for her role.” Grace Chan, who portrays Kay’s younger sister in Blue Veins, plays a character with aphasia, a language disorder that renders her unable to verbally communicate with others. Joe said, “[Grace] is a very confidant and intelligent actress. She is someone who talks very fast, so this arrangement was quite challenging for her.”

As Blue Veins was the drama that brought Grace and Kevin together in real life, Joe said, “Kevin and Grace do have a relationship line in the show, and they have quite a lot of scenes together. If they do get married, they better give me a red envelope!”

Aside from having a refreshing lead cast, Blue Veins also finds strength in its supporting characters.

Joel Chan, who plays the ancient vampire Ling Fung, was originally meant to be featured in the series as a guest star. Halfway into writing the show, the writers saw that his role was too vital for the story, and decided to promote Joel into a main cast member. Blue Veins introduces singer Hubert Wu in his third acting project since debuting in 2010. The 26-year-old plays Pong Kit, a vampire and the son of the undead warrior Pong Ying-tin (Eddie Kwan). In the series, Hubert recruits the help of Joel to go against his father.

Joe said, “Hubert Wu gives one the impression that he is quiet and cool. In reality, he is actually someone who is very forthright. He’s very suitable for this role.”

“Luk Wing always had this comedic quality to him, but I’m surprised to know that he’s also very talented when it comes to doing action scenes. He’s extremely smart,” praised Joe. The producer added that Anjaylia, who fights with a bow and arrow in the series, is another breakout star to look for. “Her character specializes in Japan’s Kyudo. There were many good reviews about her look in the series, and I have confidence in her performance.”

Passionate and with a positive outlook on life, Mung-nam slowly warms Wut-cheuk’s frozen heart, but the undead hero is hesitant to start a new relationship with a mortal. When Mung-nam returns to Hong Kong, she discovers that she is actually a vampire with locked memories. She refuses to give in to her vampiric desires, and Wut-cheuk helps her with confronting her past. Meanwhile, a series of mysterious murders plague the city, and the Undead general, Pong Ying-tin (Eddie Kwan), believes Mung-nam is the killer. He pressures Wut-cheuk to turn her in.