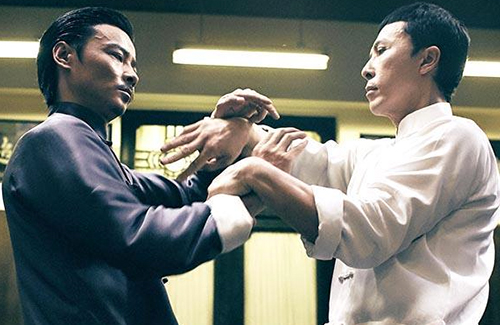 While picking up his young son from school, Ip Man (Donnie Yen) meets another wing chun master Cheung Tin-chi (Max Zhang 張晉), whose son also goes to the same school. Due to their similar backgrounds, the two masters strike an interesting friendship.

A triad boss, known by the name Sang Gor (Patrick Tam 譚耀文), crashes into the primary school community to collect debts. Ip Man and his wing chun students band together to protect the community from falling into triad hands. Ip Man later learns that Sang Gor is following the orders of an American businessman called Frank (Mike Tyson), who has ties with the Hong Kong Superintendent of Police. Even Detective Fat Bor (Kent Cheng 鄭則士), who is on Ip Man’s side, is unable to help. But Ip Man does not give up, and continues to guard the community with all his might.

In a surprise and bold move, Sang Gor abducts the schoolchildren, including Ip Man and Cheung Tin-chi’s sons. Using wing chun, the two masters manage to fight their way through and retrieve the children in time, defeating the triads. But while saving the community’s families, Ip Man ended up neglecting his own. He decides to let go of everything and dedicate the rest of his time to his family and wife, Cheung Wing-sing (Lynn Hung 熊黛林).

Frank sends a Muay Thai boxer to attack Ip Man and his family. For the safety of his wife, Ip Man has no choice but to step into the arena once again to fight Frank, a western boxer. But this east-west battle does end with a positive note—Ip Man ultimately earns the respect of Frank, and the two resolve their conflicts.

Determined to become the truest and best wing chun master, Cheung Tin-chi openly challenges Ip Man to a wing chun combat match. Ip Man declines the invitation at first, choosing his family over glory. But under Wing-sing’s support and encouragement, Ip Man finally accepts Cheung Tin-chi’s request. In this career-defining battle, Ip Man learns that his life does not only belong himself; but it also belongs to his wife, to his son, and to martial arts.