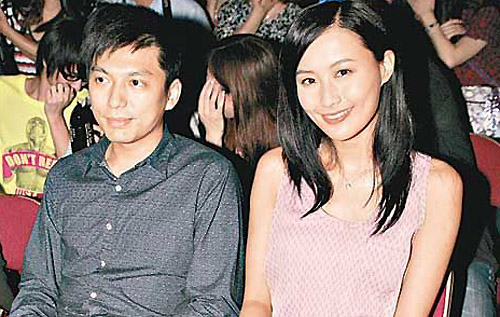 Fala Chen has been dating Sit Sai Hang, heir of Neway Entertainment, for several years. Rumors claimed that Fala has been secretly married for a long time. Fala persistently denied the marriage rumors, but admitted that a woman ultimately needs to have a family. After marriage, she does not mind following in the steps of her husband. Since her parents have a good marriage, she is full of confidence about marriage.

In recent years, Fala’s career has been fortuitous, filming television series after series. Due to her beauty and good figure, many advertisers have pursued her as well. Due to her increasing popularity, many rumors circulated, including claims that Fala was secretly married to Sit Sai Hang. Fala said helplessly, “There is no need for me to speak about my private life. Right now, I can only tell you that I feel very happy and fortunate. Since I was a child, I never experienced any harsh times. My work, family life, and relationships have all been smooth. My mother and father love each other very much; they give me confidence in marriage. I hope to have a family one day. Since I am an only child, I want to have several children.”

Hoping to Win an Oscar

Did Fala envision what life would be like after marriage? “A woman faces tremendous pressure. After marriage, she hopes to be a good wife. After having children, she hopes to be a good mother.” (Will you continue to work after getting married?) “It’s difficult to say and that would depend on the circumstances. For example, the location of where my husband works may be a factor. It is difficult to provide an immediate answer.” (Did you discuss this with your significant other?) Fala laughed, “It is more important to discuss this with my mother! She always asks me when I will get married? When will I have children? I believe that it is best to have children before the age of thirty-five, so I am taking good care of my body [for future pregnancies].”

Although twenty-eight-year-old Fala had a vision for marriage, her ambition remains due to her increasingly successful career. She once revealed that she did not have time to see her boyfriend. “Since I am busy, I had to find other ways to spend time together. While filming, there was a two hour lunch break, so we met for lunch!”

Fala was focused on improving her career. Was she interested in winning the TVB Best Actress Award? Fala smiled, “I want to win an Oscar! Haha, TVB made arrangements for me to meet with some overseas production companies to open up new paths. Sometimes work depends on the right opportunity. Aside from hard work, luck is also very important in this industry.”

Not Suitable for Hong Kong

Despite having her days and nights reversed, Fala was still able to maintain her skin and figure in great condition. “When I have free time, I love to dance. It is relaxing and helps me stay fit. Soups are also very nourishing. I like to use Clinique’s Repairwear Laser Focus Wrinkle & Photo Damage Corrector. Due to the serum’s combined functions of wrinkle control and skin repair, it helps save a lot of time in my skincare regime.”

Jayne: Fala Chen effectively dodged the issue of being secretly married. Earlier this year, she was confronted with the same question and did not directly deny the issue either. It could be very possible that she is married to Sit Sai Hang, since she left it open that she may still work after getting married. Her response to her lifestyle after marriage is very open-ended.

Married or not, Fala has great ambitions. And it sounds like Sit Sai Hang is an open-minded boyfriend too!