In currently airing TVB anniversary drama The Ringmaster <拳王>, actress Jacky Cai (蔡潔) plays capricious and overbearing rich girl Gong Ka Ching, who often snapped at Brian Chu’s character (朱敏瀚) Danny, despite the latter giving in to her time and again. As the story unfolded, she gradually revealed her forthrightness and naivete, which managed to endear viewers, and her portrayal earned their positive reception online.

On December 10’s episode, she decides to confess to Cheng Lam (played by Owen Cheung 張振朗), whom she has long harbored feelings for, and rode her bike in the rain as a delivery girl in order to help Cheng Lam hit his ‘target’. As most of the rainy scenes in the drama were shot during the winter season, the cast including Jacky, Elaine Yiu (姚子羚) and Hugo Wong (黃子恒) had to be drenched in the cold during the wee hours of filming.

Despite this, Jacky felt warmed by the crew’s efforts, sharing that they had ‘wrapped’ her in plastic cling to keep her warm. “They wrapped me very fashionably, I couldn’t resist taking a photo as memento, there was also a [temporary] room for us to hide from the cold, I felt very warmed [by the gesture],”

Differentiating The Way She Spoke 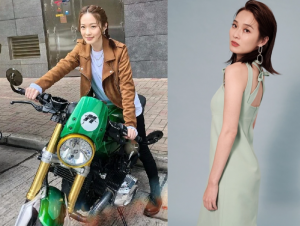 Despite having to raise her voice every time she spoke on set due to her character’s brashness, what vexed her the most was having to keep snacking. “My character loves eating, I snacked on potato chips and peanuts so much I got a sore throat. But compared to the guys who couldn’t eat, I felt I had special rights,”

The 32-year-old added that as she was rather introverted and spoke softly in real life, it was thus a challenge for her to keep getting mad and raising her volume on set.

“Don’t think only they are tired out from boxing, I’m not a weakling either. This character has very high energy levels, but I’m happy that friends who know me saw that I put in a lot of effort [for the role], especially in the way I speak.”