Yesterday, Liverpool came out victorious at the English Premier League soccer match against Chelsea, marking their first English championship in 30 years. Many fans were thrilled, including Jacqueline Wong (黃心穎), who celebrated Liverpool’s triumph on social media. Her Instagram post garnered attention, as some netizens believe her caption is related to Andy Hui (許志安), whom she was caught in a cheating scandal with last year.

In her post regarding Liverpool’s win, she wrote, “Some things are worth the wait, worth the fight. YNWA. Keep going.”

Though the caption indicates her support for the team, and “YNWA” is the acronym for the team’s slogan, “You’ll Never Walk Alone,” some netizens believe it has an underlying message. Various Internet users said the post reflects Jacqueline’s aspirations of coming out on top like Liverpool through hard work.

Meanwhile, other netizens think the message is related to Andy, who is also a huge fan of Liverpool. He previously attended a press conference held by the main sponsor of the Liverpool Football Club since 2010, Standard Chartered, as the president of the Official Liverpool FC Supporters’ Club in Hong Kong. Hence, many speculated that the message was directed at him even though they have gone their separate ways. 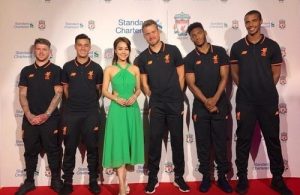 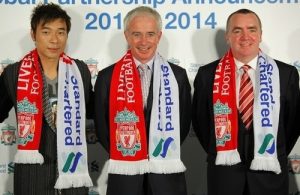 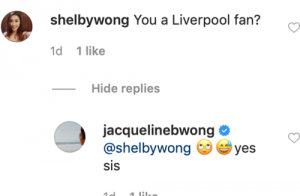