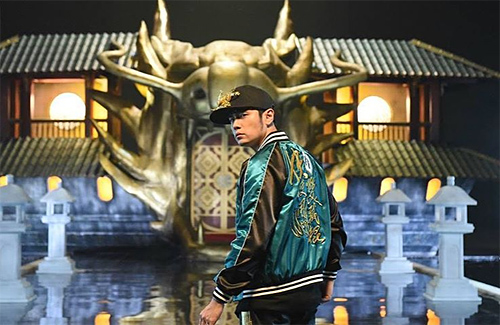 Jay Chou (周杰倫) opened his Instagram account in 2017. Since then, he has regularly updated his account and actively interacted with fans. He had become very immersed in it over the past two years, and it is evident that his interest still remains strong.

At an event, he made fun of himself by commenting that the older he gets, the more addicted he is with social media. He also playfully teased Taiwanese band Mayday vocalist, Ashin (陳信宏) in having OCD and Jam Hsiao (蕭敬騰) for being very lame.

The 40-year-old had especially flown to Hong Kong to attend the opening of his friend’s new hotpot restaurant. A hot-pot lover, he enjoys being able to choose the ingredients himself. He joked, “No need for Nicholas Tse (謝霆鋒) to cook, I have good cooking skills too.” Proving himself, he made hotpot soup base and spaghetti on the spot and invited people to try. When asked if he would create his own show and challenge Nicholas, Jay said “I was a guest on his show before. But I already have my own show about eating and playing. We even competed with each other for a segment; it just hasn’t aired yet.”

In addition, when asked upon his activeness on social media, Jay laughed, “Older people get easily addicted once they’ve discovered Instagram. I used to be quite lonely and isolated before, as I rarely interact with other artistes. We don’t remain in contact after our collaborations. But Instagram has allowed to meet and interact with a lot of celebrity friends. I could also communicate with fans as well, so it’s pretty fun.”

He also made sure to poke fun at his good friends, by pointing out how Ashin seems to have OCD, because his IG feed is very well-ordered and organised. Jam is constantly talking about very lame things, so he would also often comment to tease him.