While in Singapore to promote the launch of TVB channels on Singtel TV, Lai Lok Yi (黎諾懿) spoke with JayneStars in an exclusive interview and shares his ambitions as an actor.

Part of the “Olympic Six” along with five other actors including Kenneth Ma (馬國明) and Raymond Lam (林峰), Lai Lok Yi’s career started off smoothly but he was soon relegated to playing forgettable roles in the 2000s. Awaiting his chance to shine, his noteworthy performances in Come Home Love <愛·回家> and Who Wants A Baby <BB來了> finally propelled him into the hearts of viewers.

JayneStars chatted with the amicable star, who shares about the variety program he helmed and the projects he would love to take on next.

Inviting Longtime Friends onto His Show 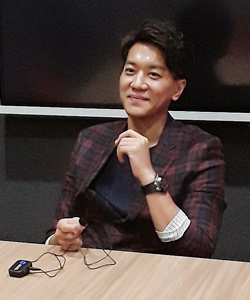 This year, Lok Yi also had the chance to invite celebrity guests on his variety show A Chef and A Gentleman <懿想得到>, which was a novel experience for him. We asked if Lok Yi enjoys his hosting duties. Beaming, he reminded us that he had once hosted a children’s program for one and a half years several years ago.

A Chef and A Gentleman was something special to commemorate his sixteenth year in the industry. “I really wanted a program where I could find my old friends and catch up together. I invited Ekin Cheng (鄭伊健) on the first and second episodes. I’m really grateful to him; he has always helped me during both my high and low moments,” shared the actor, who wishes for a second season so he could feature his other celebrity friends like Natalie Tong (唐詩詠) and Elaine Yiu (姚子羚), whose schedules conflicted with the timing of season one.

Visiting Penang, Malaysia during the filming of the program, Lok Yi was inspired to make his own innovative “durian toast”. “I think this is a viable [product] in Malaysia and Singapore. Remember I came up with the idea first, anything else would be a spin-off and won’t be as good [as mine]!” He also shared his love for traditional wonton noodles, and desire to bring the authentic Hong Kong version to diners in Singapore and Malaysia.

Lok Yi also shared with JayneStars that he would like to explore more variety programs. It had been extremely rewarding to hosting A Chef and A Gentleman and also be involved in behind-the-scenes from planning to post-production for a seven-month long period. “Seeing the program launch was like the birth of a baby. Since my name is in it, all the more I can’t let it fail.” The third character of Lok Yi’s Chinese name is included in the show’s title. “I put in much effort in the show,” he added earnestly.

The father of one also expressed his desire to act in a drama that excites him, bringing up comedy and supernatural themes as genres he is most interested in. “After acting as Ma Zhuang in Come Home Love, I didn’t want to be typecast…but now I miss doing comedy and hope to deliver a light-hearted drama to viewers.”

Pausing slightly, he enunciated his wishes to also be involved in the script-writing process of dramatic production, and added he already has two perfect scripts on hand which he is keen to play around with. “Next I’d want to be a director…don’t get me wrong, it’s not that I’ve grown bored of acting. It’s just that the older you get, the more you would want to try different things.”

Hosting A Chef and A Gentleman Lok Yi feels has also helped to elevate his acting skills. “I saw how different individuals have grown from their experiences. In actuality being an actor is precisely that – to never stop maturing and accumulating experiences,” he concluded.

This article is written by JoyceK for JayneStars.com. Joyce attended the Singtel press conference in Singapore on September 27 and interviewed Kenneth Ma, Mandy Wong, Lai Lok Yi and Rebecca Zhu. Stay tuned for JayneStars’ exclusive interviews with the TVB stars!

[JayneStars Exclusive] Mandy Wong: “Having a Few True Friends in Life is Enough”

[JayneStars Exclusive] Does Kenneth Ma Believe In the Existence of Spirits?

Singapore-based viewers can catch A Chef and A Gentleman” <懿想得到> on Singtel’s TVB Jade Channel 511.