The rising star chats about her works so far and her chemistry with Matthew Ho.

Got to Dress Prettily in “Wonder Woman”

Rebecca was excited to share more details of her role in Wonder Woman. “Ma Si Lei is someone who is ditsy, very direct and candid, and because of this causes some small troubles along the way. She didn’t know much about life, but after marrying a rich second generation, she realized that things have to change and she becomes more mature in her thinking.”

Rebecca found her character’s positivity a refreshing change from her previous roles, many of which were professionals and required more intense physical challenges. Calling it a dream come true, she thanked renowned scriptwriter Chan Bo Wah (陳寶華) for the chance to look glamorous and dress in pretty clothes on set Wonder Woman. 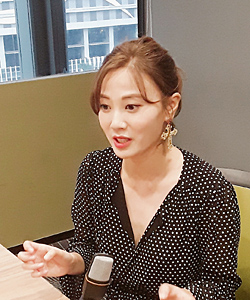 Sharing about her previous dramas so far, Rebecca relished the chance to vicariously experience a different life through acting. “In Stealing Seconds <棟仁的時光>, I had to learn pole dancing from scratch and it isn’t as easy as it seems! Hats off to professional pole dancers. As for The Stunt <特技人>, my character was someone from the poorest ranks in society who had to work herself up, even staking on her life to improve her living conditions. As a stunt double, she had no one to fall upon, as it would only be her own neglect on the job even if she meets an accident…so I got to experience the lives of these characters.”

“In A General, a Scholar and An Eunuch <超時空男臣>, I played a more stubborn girl for the first time. Collaborating with Matthew Ho for the first time, he passed his good luck to me and I was able to win an award! Working with him was very happy, and perhaps because of our chemistry and sparks, the viewers accepted and liked us,” said the actress sweetly about working alongside actor Matthew, her rumored beau.

Risky Scenes on set of “The Great Soy Factory” 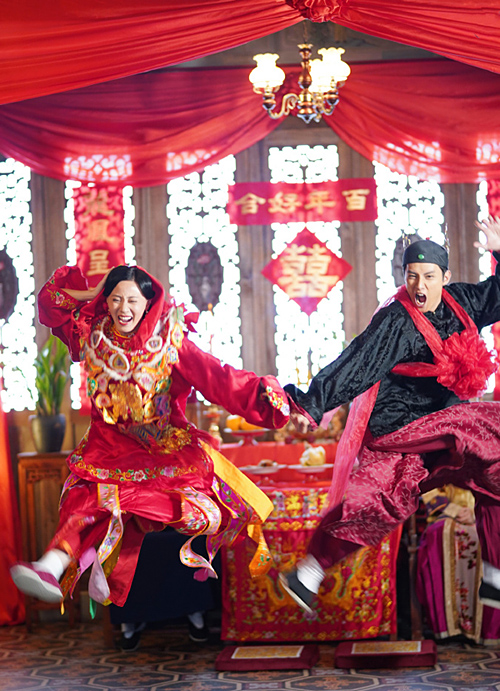 Sharing about the recent filming of The Great Soy Factory <大醬園>, the actress recounted two instances which left a deep impression. One was a scene in a river next to a waterfall with Matthew, in which her character bathed and his swam. “It was raining and the currents were strong that day. As I could not swim and there was a risk of slipping on the algae on the rocks, the crew arranged for a lifesaving professional to stand by. He held on to me in between takes, and only released me to complete the scene,” she recalled.

Rebecca also had a close brush during another scene when she had to squat into a cave which was populated by spiders. Though the crew reassured her about having used fire to chase spiders in the area away, Rebecca spotted a palm-sized spider when she got into position and momentarily panicked before dashing off.

Challenging Herself Instead of Competing with Others

With her star on the rise, Rebecca was chosen to play the iconic character Zhou Zhiruo for Shaw Brothers’ upcoming film remake of the classic Heavenly Sword and Dragon-slaying Sabre <倚天屠龍記>. A fan of Jin Yong (金庸) novels since young who has watched numerous drama adaptations, Rebecca added, “I will do my very best. There’s no need to win others so to speak, first I have to challenge myself.”

In the interview, Rebecca came across as most unassuming and genuine, and mentioned self-deprecatingly that she is “getting old”. It was actually like talking to a real friend whom you have known for a really long time.

This article is written by JoyceK for JayneStars.com. Joyce attended the Singtel press conference in Singapore on September 27 and interviewed Kenneth Ma, Mandy Wong, Lai Lok Yi, and Rebecca Zhu.

Singapore-based viewers can watch out for upcoming dramas The Great Soy Factory <大醬園> and Wonder Woman” <多功能老婆> on Singtel Channel 511.

[JayneStars Exclusive] Mandy Wong: “Having a Few True Friends in Life is Enough”

[JayneStars Exclusive] Does Kenneth Ma Believe In the Existence of Spirits?