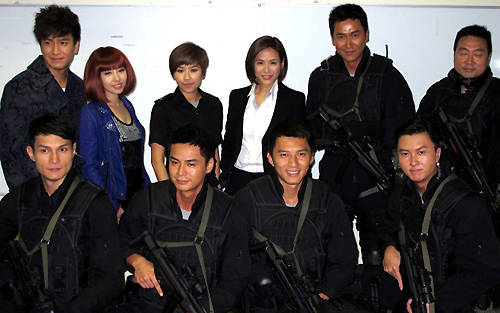 Tiger Cubs garnered high ratings since its broadcast, prompting TVB to consider producing a direct sequel for the action crime thriller. Jessica Hsuan (宣萱), who had just ended her contract with TVB this year, said that she is more than happy to film the sequel. She also expressed her interest in contributing to the sequel’s casting process, exclaiming that she is willing to use her “friendship card” to invite her own friends to guest star in the sequel!

With TVB dramas dominating the weekday television ratings in Hong Kong, their rival station, ATV, was forced to broadcast their programs in the weekend time slot. In the past, this enabled ATV programs to pull in higher ratings. However, the weekend broadcast of Tiger Cubs severely crushed ATV’s only ratings advantage.

Regarding ATV’s poor ratings, Jessica commented, “Maybe it’s because of the London Olympics?”

Portraying a pair of husband-and-wife killers, Kenneth Ma and JJ Jia share many intimate scenes in the drama. Kenneth also revealed that he had once been rumored with JJ. Since the mainstream media did not care to report about it, the rumors stopped developing as soon as they started.

JJ laughed, “These rumors can start spreading again; I will treat them as promotion for the drama! I hope everyone will stop mentioning them after the drama finishes airing.” Asked whether she disliked Kenneth, JJ immediately denied and exclaimed, “Kenneth is the City’s hottest property!”

The cast of Tiger Cubs also revealed that they planned to hold a yacht party to celebrate the success of the drama’s ratings. JJ excitedly said, “That sounds great! Now I can push Joe Ma (馬德鐘) into the water!” When asked if she plans to appear in a sexy outfit, JJ denied, “Now that I’m injured I have nothing sexy to show.”