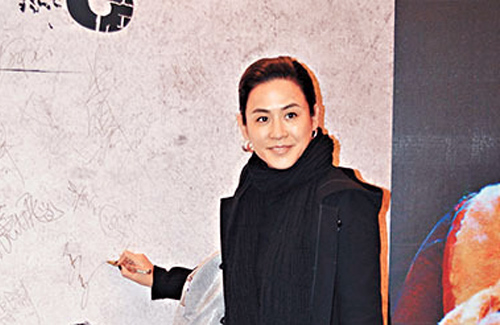 Jessica Hsuan (宣萱) made a rare public appearance to attend the showing of Hong Kong theater musical DOGs. Jessica was there to support good friend Mimi Lo (羅敏莊), who stars in the musical alongside Alice Lau (劉雅麗).

The 43-year-old former TVB actress revealed that she recently took a few days off to vacation in Korea with a few of her closest girlfriends.  Currently single, Jessica was asked if she met any potential boyfriends in Korea. She sighed and said she has not, also admitting that she is not that interested in Korean men, explaining that communication would be difficult due to the language barrier.

Earlier, Jessica was photographed spending an entire day with a male friend. The pair was seen eating meals for seven hours. Jessica denied that the male friend was her new boyfriend, saying, “He was the same friend whom the reporters linked me with over ten years ago. Now he’s getting framed again. We are just friends. He already has a family.”

She reassured that although she is single, she does not feel like her life is empty. “At the moment I don’t have met anyone I’m interested in. There have been too many unhappy examples around me, and I will think clearly before I start dating. I’m not in a hurry, and I’m not worried about age.”

After promoting her upcoming drama Tiger Cubs 2 <飛虎II> in Singapore last week, Mandy Wong (黃智雯) fell sick on her trip back to Hong Kong. Contracting gastroenteritis, Mandy spent a majority of the weekend resting at home. “After finishing my day’s work on Valentine’s Day, I immediately went home to rest,” she said.

She revealed that she did not spend Valentine’s Day with her boyfriend. “Can’t kiss him. I don’t want to get him sick. I also don’t need him to take care of me. I can cook myself.” Though Valentine Day’s plans were crushed, Mandy said she will make it up to her boyfriend soon.  “I’ve made chocolate, and I’ll celebrate with him soon. As long as you’re happy, every day is Valentine’s Day.”

Mandy also disclosed that good friend Myolie Wu (胡杏兒) has received flowers. “I didn’t ask who gave them to her.”

8 comments to Jessica Hsuan’s Single Life is Not Lonely