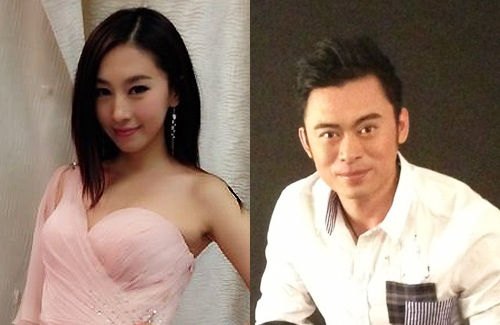 JJ Jia (賈曉晨) may give up her career for love, as she is consider marrying Louis Fan (樊少皇).

Rumors about JJ’s career and personal life circled non-stop since she was discovered to be dating boyfriend Louis Fan. Her “homewrecker” image almost cost her career and reportedly forced management company boss Nat Chan (陳百祥) to not renew her contract. Recently JJ was found negotiating for jobs personally, which may have further offended Nat. Although her current contract is ending at the end of the month, JJ’s next move remains uncertain.

On Monday night, Nat Chan and wife Cecilia Wong (黃杏秀) attended an EYT Friends dinner gathering along with over 200 EYT performers. At the event, Nat calmly addressed allegations against JJ and explained her current dilemma. Nat said he never refused to renew JJ’s contract. Nat was not angry about JJ accepting jobs on her own because he will earn commission either way.

Nat revealed that JJ is rather temperamental and cannot make up her mind. She often goes back and forth between career and marriage and does not even know if she wants to marry Louis.

Nat declared that he will fully support JJ’s decisions. “I care about JJ a lot. Maybe JJ feels left out because our company has recently signed many newcomers. She feels the need to get married soon [to secure her future]. If she doesn’t get married and wants to continue acting, I’m okay with signing her again. I will also support her if she plans to get married and leave the entertainment industry.”

Nat mentioned that JJ had discussed her dilemma with him over Chinese New Year. He advised JJ that the most important thing is to have a clear focus and to give it all her efforts, whether she ultimately chooses career or love. Nat is happy for her if JJ does choose marriage. “I don’t have any daughters. If she gets married it’ll be like marrying off a daughter.”

26 comments to JJ Jia Cannot Choose Between Marriage and Career