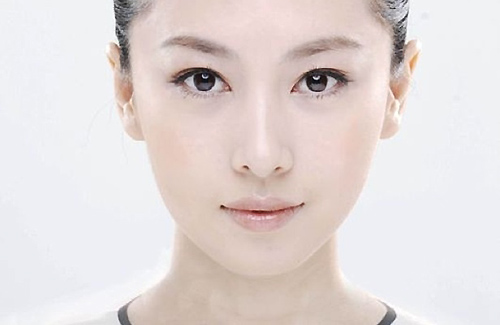 Since walking away from Nat Chan’s (陳百祥) management company, JJ Jia (賈曉晨) has not had a shortage of job offers. Modeling in a swimwear event earlier with Wylie Chiu (趙碩之) and Jeanette Leung (梁政珏), JJ appeared to have noticeably gained weight. Perhaps JJ is happily dating and although her C-cup bosom has not changed, there was some flab on her back and waist.

JJ explained that she has a bad habit of sitting down and bending her body forward, resulting in extra flab on her waistline. “Actually, I have been on a diet for the past month, without any rice. However, my upper body did not slim down. I feel that girls with a bit of flesh is nice, but I don’t know why I have put on so much weight.”

This is the first time JJ did a catwalk in swimwear and admitted that her fees was a six-figure sum. She said she did not discuss with her boyfriend, Louis Fan (樊少皇) regarding this job, she only told him after she has accepted it. “I didn’t want to spend too much time explaining [to him]. After he knew about it, he was very anxious and kept asking is it alright since there is so little cloth? As a result, I kept looking at the mirror, afraid that I may accidentally expose myself unnecessarily.” This job was through her ex-management company and JJ revealed that in the future she may not take on such shows anymore due to her conservative nature.

To celebrate boyfriend Louis Fan’s 40th birthday on June 19, JJ Jia (賈曉晨) flew to Hengdian and got drunk. They had a passionate dating relationship since last year, with JJ frequently traveling to China to visit Louis’ filming sets. The couple met with friends during Louis’ birthday, and downed so much alcohol that they were unable to stand up straight.

JJ was spotted squatting on the sidewalk curb, vomiting heavily. Their friends helped lift her and Louis into the car, as the couple continued to stagger. Their friends took them up the hotel elevator and left JJ and Louis in their room to sleep through the night.