Taiwanese actress Joe Chen (陈乔恩) has found love and announced that she is currently in a relationship with Malaysian rich second-generation Alan Chen (曾伟昌). Meeting on Chinese reality show Meeting Mr. Right 2 <女儿们的恋爱2>, the 40-year-old actress was attracted to the 31-year-old artist’s warm and gentle personality. 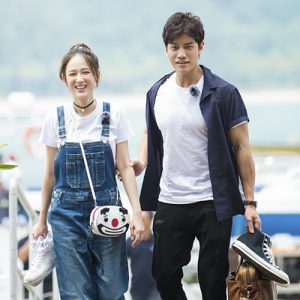 Although Joe has finally found romance after professing to be single for six years, viewers aren’t too pleased and don’t see her new relationship favorably. Aside from criticizing Alan for his plain looks, they dug deeper into his social media activities and discovered that he follows and likes the bikini photos of many popular model/ social influencers on Instagram. Pointing out his poor conduct and flirtatious ways, they hoped Joe would reconsider in dating him.

In announcing her new relationship, Joe wrote, “Coming to film Meeting Mr. Right means I want to fall in love. I didn’t come for the money. Thanks to the production team. Thank you for the blessings brought by the dolphins. There are no script and no lines. Thank you for everyone’s attention. Love did not give up on me, because it won’t let go of anyone who believes in it.”

Alan also made a similar post in thanking the show and Joe, “In the world of billions of people, we were meant to find each other. Love never leave us or anybody. A life of a few decades is too short for anything, so just be brave to love!”

Joe had agreed to appear in Meeting Mr. Right 2 with an open heart. Feeling often insecure and discriminated due to her age, she appeared cautious but open-minded to embrace a romantic relationship. Though their age gap and location brought the two some concerns during their dates on the show, Joe was attracted by Alan’s warm exterior which she believes reflects his good family upbringing.

Recap on Joe and Alan’s Dates

Joe Chen: “I Prefer Money Rather Than Companionship When I Grow Old”