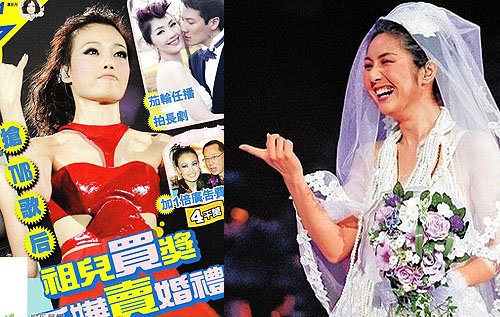 Thirty-six year-old Miriam Yeung Chin Wah will be holding her Hong Kong wedding banquet on December 20th. Since marriage is a big lifetime milestone, of course Miriam wanted to extend her prestige by sweeping the 2010 year-end music awards!

Suppressed by arch-rival, Joey Yung Cho Yi, for many years, Miriam allegedly asked Media Asia’s Chairman, Peter Lam, to negotiate with TVB to give her the Jade Solid Gold “Most Popular Female Singer Award.” The terms include allowing TVB an exclusive half-hour broadcast of the wedding day and Miriam’s agreement to film a long TVB series and two music specials in 2011. It was also made clear that Miriam did not mind her husband, Real Ting Chi Ko, making an onscreen appearance. It’s apparent that Miriam worked so hard in order to win the “Most Popular Female Singer Award.”

Fortunately, Joey Yung also had the backing of EEG’s boss, Albert Yeung. Allegedly, Mr. Yeung doubled its television advertising fees to the price of $40 million (HKD) to pressure TVB [during the awards season]. In addition, Joey has good relations with TVB management. At a recent dinner celebrating the success of her recent concert, Joey dined with TVB executives, Ho Lai Chuen and Virginia Lok Yi Ling.

Two music queens fighting for awards using their specialized tactics, of course the winner should be the one that “sings best!”

Jayne: At the 2008 Jade Solid Gold music awards, when Miriam got the “Most Popular Female Singer Award,” the camera captured Joey Yung’s awkwardness onstage. Joey tried to congratulate Miriam (shake her hand or offer her a hug) on several occasions, but Miriam turned her back on her multiple times and completely ignored Joey! Maybe Miriam’s actions were subconscious, since Miriam naturally turned to her closer friends for hugs first. It was very telling of Miriam and Joey’s rivalry.

As the to results of the 2010 JSG Awards, I do believe it is Miriam’s year. Her wedding has gotten so much press coverage, she’s a hot favorite among advertisers, and filmed “Perfect Wedding” with Raymond Lam. I’m sure TVB will reward her with top awards!

I started listening to old Hong Kong music from the 1990s recently and truly enjoyed the beauty of Jacky Cheung, Sandy Lam, and Cass Pang’s voices. I like Joey’s music well enough, but she is still more of a “performer” than a Cass Pang in my mind.Where did the Hong Kong music talent go in this generation?! Many newbies are like “karaoke singers!”