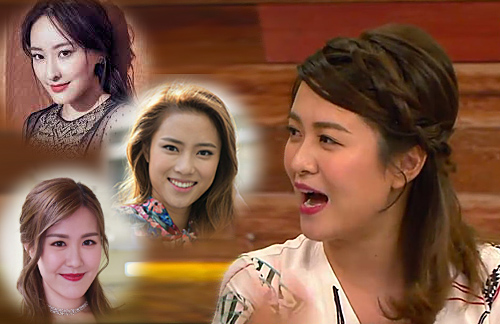 In a recent episode of popular talk show, Young And Restless <後生仔傾吓偈>, Kaman Kong (江嘉敏 ) reveals gossip about an actress she previously worked with, who is known as a big flirt with TVB management.

Not revealing any names, Kaman expressed, “I was supposed to work with artiste ‘A’. When I went around to ask some co-workers about what it was like to work with her, I heard a lot of gossip. There were rumors about how flirtatious she is. But I didn’t believe it, so I asked a lot of different people.”

According to Kaman, many people told her that “A” acted inappropriately at times. Kaman revealed, “I heard that she would always flirt with higher management, and would randomly bring out her scripts during meal gatherings.” But Kaman said that the actress’ “good figure” and “sultry voice may have given people the wrong impression.”

However, during the “Fact Check” segment of the show, Kaman said she got to know the true side of the actress despite hearing negative rumors about her. Adamant on keeping the identity of “A” a secret, Kaman expressed that she discovered “A” is very nice and caring, and would often take care of others on set since she is an older sister in the family.

Speculating that Kaman actually became good friends with “A” after working with her, netizens began a process of elimination to see who the alleged actress may be. Looking back at Kaman’s list of previous female co-stars who fit her description, netizens narrowed the list down to three possibilities: Jeannie Chan (陳瀅), Tiffany Lau (劉穎鏇), and Moon Lau (劉佩玥).