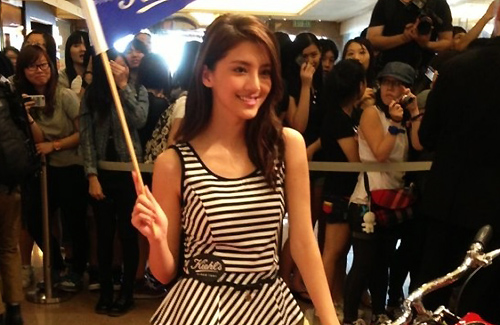 Karena Ng (吳千語) made an appearance at a charity event today and declared that she found Wu Chun (吳尊) to be the sexiest man. The event aims to donate $700,000 HKD to Josephine Siao’s (蕭芳芳) End Child Sexual Abuse Foundation (護苗基金), which provides counseling hotlines, workshops, and educational programs to raise awareness of this serious issue.

Alex Fong, JJ Lin, Alex Lam, and Pakho Chau were in attendance on opening night. Since Raymond Lam was absent, reporters asked girlfriend Karena if she was there on his behalf. Karena replied that she was simply there to support the charity.

Glancing through all of the great photos, Karena praised Richie Ren’s wet-and-sexy look, and concluded that Wu Chun is the sexiest one of all. The host quickly asked if she finds Raymond not sexy enough, Karena joked that he looks asleep in his photos. Reporters then asked if Raymond would feel jealous over her comments, Karena assured everyone that Raymond and Wu Chun are good friends. When asked if she would press Raymond to tone up to achieve Wu Chun’s muscular frame, Karena said, “Every man who wants to become muscular must train hard every day; it’s not an easy task.”

Karena later shared that she has been losing a lot of weight recently. She added that Raymond is not too worried about her physical state but she would like to gain a few pounds.

Earlier, Raymond’s rumored ex-flame Rose Chan (陳嘉桓) commented on Karena’s large collection of name-brand purses, saying that Karena should first consider if these luxury items are age-appropriate. Responding to this report, Karena explained that she was not offended by Rose’s comments and defended her purchases. “I don’t think she was implying I am materialistic. I didn’t buy them because of the brands, but because they look good. I am simply spending money I have earned on what I love!”