Karena Ng Opens Up on Relationship With Raymond Lam 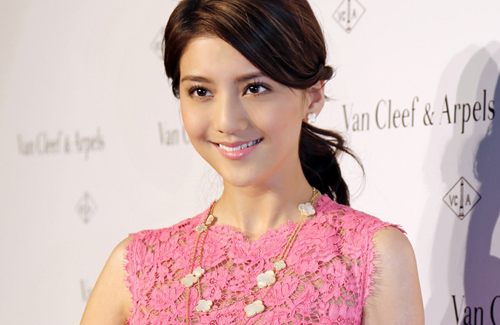 In February 2013, Raymond Lam (林峯) did what he never did before – he announced to the world that he is dating 19-year-old Karena Ng (吳千語). It was a surprise move on Raymond’s part, who had a habit of keeping his romantic life behind closed doors.

“We chose to reveal our relationship because we want to everyone to accommodate it. We want everyone to give us space and support us,” said Karena in her interview with Ming Pao Weekly.

Truthfully, Karena’s income has gotten higher after cementing her relationship status to the public. “Good and bad things came out of it,” said Karena. However, the Magic to Win <開心魔法> star insisted that she will not attend public functions with her boyfriend. “We don’t want to commercialize our relationship. I still cannot muster the energy to act in front of someone I love. Maybe I would be able to someday in the future.”

Denies Being a Gold Digger

Raymond and Karena’s relationship has had a turbulent affair with tabloids ever since Raymond confirmed their romance. Numerous tabloid sources alleged that Karena had “wooed” Raymond to spend over $10 million HKD on gifts, including the purchases of designer bags, luxury cars, and two million-dollar mansions. In extreme cases, some sources went on to claim that it was Karena’s mother who encouraged Karena to date Raymond, and taught her “the rules of gold digging.”

Karena expressed that she felt extremely helpless with these allegations. “I am not that kind of a person! And now my parents have also become involved. It is an insult to my family, to the point of slandering them.”

Although flooded with negative rumors, Karena insisted that she will not give up on her love and will courageously counter all back-fence talk about being materialistic and possessive. “I know there are people who don’t want us to be happy, but if I allow these people to control and influence me, wouldn’t that make me very stupid?”

Why She Fell in Love

Karena met Raymond on the set of romantic comedy film Love Is… Pyjamas <男人如衣服> in 2011. Karena’s first impression of Raymond was neutral, and the pair did not have much opportunity to interact with each other on set. It was not until after post-production when Karena and Raymond met up.

“We hung out a lot afterwards, and we slowly got to know each other. We were friends first.”

After several months of meeting up, Raymond made himself clear that he planned to pursue her. Karena was hesitant to accept it. “I considered for a long time because his age, experience, and seniority [in the industry] greatly exceeds my own, and I know dating him would be a lot of pressure. It was not something I wanted in my dating life. I wanted a simpler one, where the two of us can go shopping and cook together, and not having to reserve a private room just to have dinner.”

What changed Karena’s mind? “[Raymond] touched me with his character. Whether it’s me, my family, or friends, he treats them all very well. He is a good man. He knows how to take care of others. When I am sick, he shows that he cares, and that tenderness can be felt all around him. I like things that are well-thought and genuine. He is very good at doing that.”

What considerate hings have Raymond given her? Karena blushed. “He wrote to me, and would send me holiday cards.” The interviewer tried to get Karena to disclose some more details, and after a few attempts, Karena finally gave in. “His first card to me was a Christmas card. It wasn’t anything too cheesy. He didn’t write silly things like ‘I will take care of you forever,’ but wrote very well-planned and thoughtful recounts of the memories we shared. He wrote it like a poem. I was very touched when I received it.”

How many cards has she received from Raymond? “Only a few. There aren’t many holidays out there!”

On Her Negative Rumors

Before dating Raymond, Karena admitted that she went out with Derek Lim (林建隆), the younger son of former Miss Hong Kong Ellen Wong (王愛倫). “I already broke up with him before I went out with Raymond. I used to be a very immature person. We were both very young. We were like children – always fighting, all the time.”

But Karena is thankful to have met Derek. “I am very lucky. The boys that I have met in my life were all very kind and loving.”

With rumors of Karena spending millions of Raymond’s hard-earned cash, tabloids claimed that Karena is having a relationship with Raymond’s money instead of himself.

Karena clarified these rumors. “I do not live in a mansion in MacDonnell Road. I cannot afford to rent a home that is over $80,000 HKD a month. The rent I have to pay is not even half of that. My company is supporting me. [Raymond] did not pay on my behalf. Also, my parents live in Australia. They rarely come to Hong Kong, but my mother would occasionally come to visit me. Why would Raymond rent a house for them? He is not close to my parents like what the tabloids are saying. They have talked once on the phone. They’ve never met each other in person.”

Karena expressed that the negative rumors have not affected her relationship with her family, but remarked that some of the rumors involving her parents have gone too far. “They’re absolutely ridiculous and insulting.”

A recent rumor illustrated Karena’s mother to be “gold-digger trainer” and that she has been teaching Karena on how to spot financial providers. It was rumored that Karena intended to drive a $3.2 million HKD luxury car and she was urging Raymond to purchase the car under her father’s name.

Karena shook her head at the rumor. “Our relationship is our business. I understand that a relationship like this would be talked about, and I can deal with my own gossip, but there really is no need to hurt my family like this. My parents did not want me to join the industry at first. I convinced them for a long time before they allowed it. Mom was very worried, but after I finished my second movie, she calmed down. She knows I can take care of myself now. The rumor of me buying a car is absolutely ridiculous. I don’t even have a driver’s license. I don’t know anything about cars. My dad doesn’t live in Hong Kong and he doesn’t have a Hong Kong driver’s license, so how is it possible to register the car under my father’s name?”

The root of Raymond and Karena’s rumors began soon after Raymond announced the relationship in February, before the couple decided to travel around Japan and Italy in 19 days. “The trip was arranged by [Raymond]. I just finished shooting a drama in mainland China, and we were both very tired by work. Coincidentally, both of us could afford some days off together. Since staying in Hong Kong is stressful, we decided to go elsewhere to relax. It was fun.”

Rumors quickly caught on that Raymond had purchased over six designer handbags for Karena in Milan. Karena said, “I didn’t buy handbags when I was in Milan. Maybe someone saw me holding a small shopping bag. I bought him a rope bracelet. It wasn’t extremely pricey. Just a small gift.”

Karena stated once again that Raymond only gave her one handbag – a pale-colored Hermes leather bag that she was caught holding on her flight back to Hong Kong from Los Angeles. Raymond shared the same handbag. “It was his Valentine’s Day gift to me. I never asked him to buy anything for me, but during holidays, we would exchange gifts.” Karena also gave Raymond, who has a habit of collecting toys, a set of action figures. “I went through many means to collect them for him.”

It was widely reported that the sole purpose of Karena’s visit to southern California was to visit Raymond’s parents. Last month, Raymond took Karena to his younger brother’s graduation at the University of Southern California.

“Rocky (Raymond’s brother) and I are around the same age, so we got along well. It was he who invited me to the ceremony.” Karena insisted that she got along with Raymond’s parents. “We ate together and laughed together. They were such baseless reports.”

Karena and Raymond wear the same “couple” ring, but with the fear of paparazzi exaggerating the issue, Karena chose not to wear it anymore. “It’s just jewelry, like what couples wear. Compared to having the same bracelets or handbags, rings can be more sensible.”

Asked if Karena would agree to marry Raymond if he proposed right now, Karena said, “Wow, I never thought about that! I really don’t know how I would react! But we are all logical human beings. [Marriage] is definitely not in the near future for us. I’m will be turning 20. It’s too early. I can’t picture myself being a housewife already. Right now, I’m just thinking about if I have to fly over to United States to shoot my new movie, or where I should go for my vacation afterwards. Just these short-term things.”

Karena is aware that Raymond likes children, but she has not thought about having children herself, or how much she would have. “He has a very close family. Maybe there is a big age gap between him and his brother, so he takes care of his younger brother very well.”

However, Karena does hope to marry by the time she turns 30. “That’s the perfect time.”

Throughout the interview, Karena displayed a sense of maturity that not every 19-year-old would have if he or she was in her situation. In just two years, the entertainment industry has changed Karena from a hopeful teenager to a sophisticated young lady.

“I want to be successful. I want to do things for myself. I don’t want to rely on anyone.”

Currently shooting his new television drama in Hengdian World Studios, Raymond accepted a long-distance phone interview with Ming Pao, clarifying his thoughts on the current rumors that are plaguing Karena and their relationship.

“These rumors are attacking her and her family. How many more times can I apologize to her family? It’s okay if the news is about me, but why is it now her fault? She is unhappy, and that makes me unhappy. Whatever she tells [to the press] is the truth and I pledge my word for it. I support her.”

Raymond is not bothered by the 14-year age gap between him and Karena, saying, “She is young, but in many ways, much more mature than I. She has taught me many things. She is a good girl with a sense of propriety, and she [has] made me become a better man. This is true.

“I said I loved Karena seven times, and the reason for that is to express that I don’t want our relationship to be hidden any more, and that would have been my last time responding to our relationship. Regardless, I thank everyone for their concern.”